A University of Guelph rugby player has been named one of the 30 athletes listed in this year’s RBC Training Ground talent search, pushing her closer to her dream of competing in the Olympics. 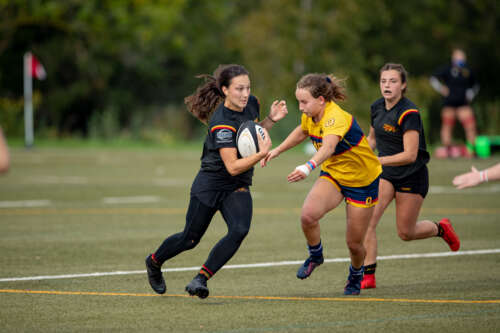 U of G fullback Talia Hoffman in a game against Queen’s University. (Photo by Laurel Jarvis)

Environmental sciences student Talia Hoffman will receive $7,500 in funding from the RBC Future Olympian Program. The funding is aimed at helping the athletes with expenses such as training costs, equipment, nutrition and competition fees.

Hoffman was nominated by Rugby Canada. This marks the “second consecutive year in which a member of the Guelph Gryphon women’s rugby program has received funding through the RBC Training Ground,” said Kelly Russell, head coach of Rugby Canada’s Maple Leaf Academy. In 2021, the program selected U of G Gryphon Kendra Cousineau.

Russell said Hoffman is “a standout in the U Sports System and her RBC Training Ground test results show she has the raw materials to be a national team player.”

Hoffman was one of 4,000 athletes from across Canada competing in the RBC Training Ground Search. After her tryout, she was selected as one of 100 finalists from which 30 were chosen to be RBC Future Olympians.

In front of Olympic talent scouts, the potential athletes, aged 14 to 25, test their core speed, strength, power and endurance. In all, 1,400 athletes have been identified throughout the six-year-old national program.