The sensation of being immersed in water is something Chantique Carey-Payne, head coach of the University of Guelph’s swim program, has always loved. She started swimming at age 3. Her athletic ability and intelligence drove her to perfection. Now, she trains others to swim to the best of their ability.

“I just love being in the water,” she said. “Just the feeling of it is something I find pretty fantastic. I don’t know why I loved the sport of swimming so much, but I just never got bored with it.”

After a varsity career that saw her win a treasure-trove of provincial and national medals, Carey-Payne became the first Black woman in Canada to be named head coach of a university swim program. She dove into that role at U of G in 2017, at age 27.

“When I found out I got the job, I was so excited,” she said. “Being a head coach was my dream, but I never anticipated I would reach that goal as early as I did. Shock was my first reaction. And then, I was so grateful.” 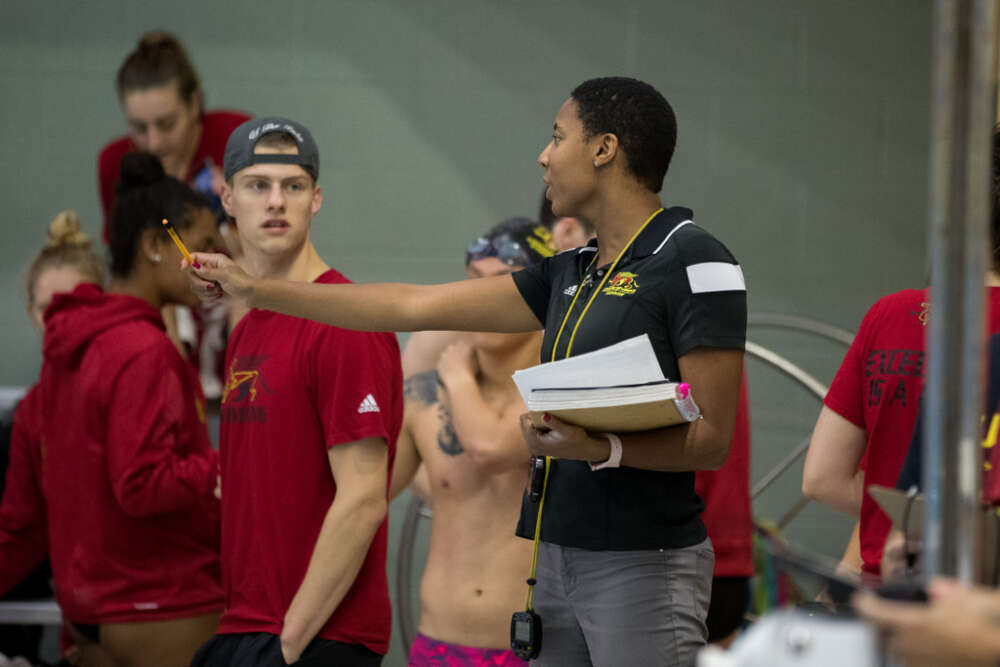 While she darned to dream of becoming a university coach, she understood the realities that made fulfillment of the dream a longshot. As a Black woman, she knew that her race and her gender might limit her chances.

“Being a female coach in the sport of swimming is not something that you see very often at higher levels,” she said. “There are very few of us across all of Canada at the national and varsity level. So, for someone to give me a chance as a very young, female Black coach was really amazing.”

She joked that there was “just a little pressure” coming into the job, but she has “loved it so much.”

A multiple medal winner for the U of G swim team, Carey-Payne was an Ontario University Athletics (OUA) All-Star in each of the four years she competed for the Gryphons from 2007 to 2011. She earned 11 OUA medals and eight national university medals, excelling in the butterfly stroke and freestyle.

After her competitive career, she began coaching with the Guelph Marlins Swim Club. She also served as a full-time assistant coach with the Gryphons and coached the Canadian Lifesaving Team.

“With the U of G team, I try to make it as inclusive as possible, and I carry a really large team for that reason,” she said. “I try very hard to make sure everybody is equal on the team – everybody gets the same amount of attention and the same privileges, whether they are making the USport national standard or struggling to make it to OUA championships. Everybody is valued.”

Every athlete on the team, she added, can bring something at champion level to the pool – whether that is perfect attendance, a solid work ethic or exemplary team spirit.

Carey-Payne has talked about potential programs to engage BIPOC swimmers with Jackie Beckford-Henriquez, head coach of the University of Waterloo Warriors swim team and the second Black woman swimming coach in Canada.

“The percentage of children of colour that don’t know how to swim, in comparison to their white counterparts, is pretty staggering,” she added. “As a result, the number of drownings and accidents around water is completely disproportionate.”

Swimming is a costly sport, she said, adding that new pathways are needed to make it more accessible for the BIPOC community.

In recent times, a heightened sense of awareness has been generated around the systemic racism that oppresses Black people in North America and around the world. The Black Lives Matter movement has sparked widespread conversations on the subject, Carey-Payne said. As difficult as those conversations may be, they are a very positive step forward.

“It has finally started a lot of conversations that people weren’t willing to have in the past,” she said. “It is forcing people to have those conversations. You can no longer claim ignorance to the fact that these conditions exist in our society. It has educated people and challenged the way people think. I think it’s been great.”

Systemic racism has existed for generations, she said, but now more people know what it means and how it affects so many lives.

She hopes that advocacy for justice and equality for Black people is not simply a “performative” act and passing fad but a conversation that will bring about lasting change.