In September, when the first undergraduate students enrolled in the University of Guelph’s new Sexualities, Genders and Social Change (SXGN) programs begin their studies, it will mark the official start of a new program and perhaps a new chapter for LGBTQ2SIA+ faculty, staff and students.

“I hope it’s a process of mutual and reciprocal change,” said Dr. Ruth Neustifter, a queer, non-binary professor in the Department of Family Relations and Applied Nutrition poised to teach some of the program’s courses. “Hopefully this is one of those things that creates that cultural shift.”

Neustifter is one of a handful of out LGBTQ2SIA+ faculty, and the journey through their career has not been without challenges. “I don’t look like I belong here, but here I am,” they said, pointing to their tattoos and hair often dyed in brightly-coloured hues that regularly leave them mistaken for a student, or misgendered despite their pronouns permanently decorating their knuckles in ink.

The new interdisciplinary program is available to both undergraduate and graduate students, who began courses last fall. Neustifter is excited students will engage with theories drawn from feminism, decolonialism, masculinities, gender and race – topics that inform the realities of the queer community.

“I think Pride Month is an important time to be thinking about that,” they said. “The champions of Stonewall were not white queers, the people doing the protecting were not the police. That’s an important thing to be aware of. That’s fighting white supremacy. That gets really lost with our rainbow logos.”

Many of the archaic structures that continue to oppress marginalized communities are rooted in white supremacy, they said, despite the term’s often exclusive association with extremists.

“White people have two distinct genders,” they said, a concept that leads to the notion that any culture that does not organize itself by the gender binary is inferior. The “2S” in the LGBTQ2SIA+ acronym represents Indigenous peoples who identify as two-spirit, reflecting a more nuanced understanding of gender roles and spirituality.

In South Asia, recognition of non-binary people has been part of the culture for more than 2,000 years. Hijras are considered a third gender, not transgender as they are often mistaken.

Queer and trans knowledge and research is commonly discredited by the mainstream social sciences, said Dr. Adam Davies, a queer, non-binary professor in the Department of Family Relations and Applied Nutrition who assisted in the development of SXGN.

Commonly viewed as “impractical,” Davies said, this mindset leads to the erasure of queer and trans voices and knowledge from programs of study and perpetuates the belief that these theories are “too difficult” for students to engage with, particularly from disciplines outside of the humanities. “Yet, theory is lived and everywhere,” they said. “As such, it is important that students learn and engage with theoretical frameworks that speak to and represent their lived experiences.”

Davies said that in social sciences – particularly psychology – LGBTQ2SIA+ communities have been pathologized and research produced having been conducted on queer and trans people, instead of with queer and trans people. “An example of this can be considered in the historical and current pathologization of femininity in young boys and the lines of research in developmental and clinical psychology that have, and continue to, deem feminine boys as abnormal and gender deviant.”

Unpacking privilege and learning how to use it effectively

Creating a space like SXGN to progress the conversation requires critical thinkers and a willingness on their part to consider personal biases and privilege, Neustifter said. “The word privilege is often really painful for people,” they explained. “Nobody is asking the people with privilege to give up the things that should be universal – homes, safety, respect, equity.” 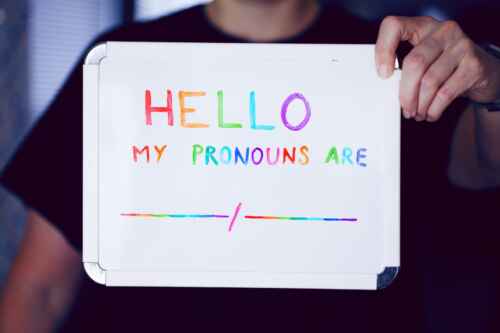 The key is leveraging the privilege “you can’t get rid of” and using it to make change, they said. “When people with tremendous privilege tell you, ‘you’re speaking up too much,’ that’s the time to keep speaking.”

Students in SXGN will learn how to deconstruct normative ideas in all fields and consider how power dynamics imbue knowledge systems, preparing them for careers in government health and social policy, development and program administration, human resources, education, social work and health information management.

“Our hope is that the new programs in gender and sexuality studies will allow queer and trans students, and all students of all gender and sexual identities at U of G opportunities to learn to critique the dominant and hegemonic knowledge traditions that reign supreme and seek to diminish the contributions of queer and trans narratives, knowledges and histories,” said Davies.