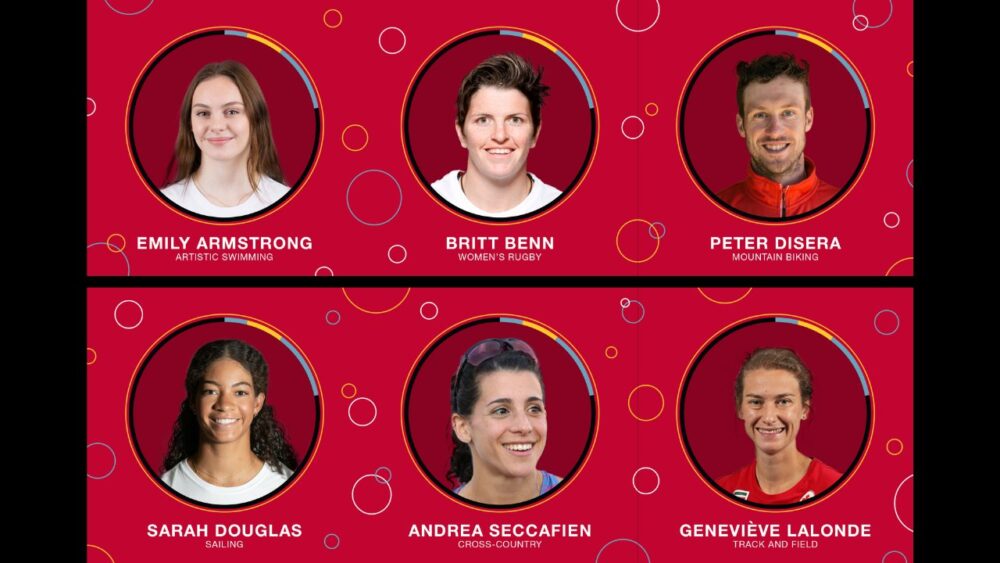 Six University of Guelph current and alumni athletes – from mountain bikers to artistic swimmers to Laser Radial sailors – gave their all at the Tokyo Olympics. The games ended on Sunday.

The Laser Radial racer alumna Sarah Douglas entered the Aug. 1 final in fourth place in the points standings, but finished ninth in the final to drop out of medal contention. Douglas has a bachelor of commerce in marketing from U of G. A full-time sailor, she finished sixth in her Olympic debut.

The 27-year-old from Toronto put in the best women’s individual performance in the sport in Canada’s history. Douglas won gold at the 2019 Pan Am Games in Peru and was named the 2019 Rolex sailor of the year by Sailing Canada.

Seccafien joined U of G in 2010 and competed in women’s cross-country and track and field. She won gold in the 5,000m event at the 2013 Canadian Championships — the first of her four national titles in the distance. She graduated in 2013 with a bachelor of arts in international development studies.

Canada’s eight-person artistic swimming team includes U of G student Emily Armstrong, who is majoring in psychology at the University. The team, ranked third in the world, competed in Saturday, placing 6th.

Armstrong is a first-time Olympian, who made her first appearance with the Canadian national team in the 2018 FINA World Series in Paris. She helped the team earn gold at the 2019 Pan Am Games.

Mountain biking competitor Peter Disera finished 26th overall in his event on July 26 after a hard-fought race. From Oro-Medonte, Ont., Disera graduated from U of G in 2018 with a degree in water resources engineering.

He trained while at U of G and was the Canadian mountain biking champion in 2018.

A 6th-place finish at the World Cup in July 2019 paved the way to earning a spot on the Canadian Olympic team. He was the only Canadian competing in the men’s cross-country mountain biking event.

Geneviève Lalonde beat the Canadian 3,000-metre steeplechase record twice at the Tokyo games – besting the record in her first race, breaking her own record in the second race.

Lalonde completed a bachelor of science in environmental sciences at U of G, majoring in geography. She graduated with a master of arts in geography in 2017. She competed for the Gryphons in cross-country and track and field.

Originally from Moncton, N.B., Lalonde competed at her first Olympics in 2016, becoming the first Canadian to advance to the women’s 3,000-metre steeplechase final. Her original Canadian record from that event was broken by Regan Yee. Lalonde regained the record.

Britt Benn competed for the Gryphons rugby team for five years while studying sociology. She led the team to five OUA gold medals, three CIS bronze and two CIS silver. She graduated in 2012 and went on to compete with the Canadian Olympic team, first at the Rio Olympics in 2016, and this year in Toyko. Benn, 32, is a certified firefighter.

To the surprise of many, the Canadian women’s sevens team, which won bronze in the Rio Olympics, failed to get out of the pool stage and finished ninth overall in Tokyo.

Joanna Brown, women’s triathlon, also competed in the games. She graduated from U of G in 2015 with a bachelor of commerce degree in marketing management.

From Carp, Ont., Brown competed in her first triathlon at the age of 14 and made her international debut in 2009. After winning a bronze medal in the 2010 ITU World Junior Championship, she set her sights on becoming an Olympian. She joined the national team in 2011 and competed in the Pan Am Games in 2015.

In Tokyo, Brown failed to place in the final after being lapped in the bike portion of the event. When this happens, the competitor has to remove themselves from the race.