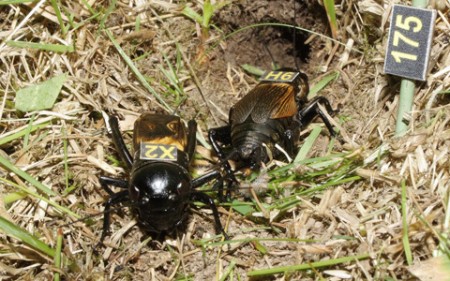 Human relationships and interactions form our social network. Crickets are no different, except their networks are simpler — no food photos or political rants plastered all over social media.

Studying field crickets in Spain during his PhD at the University of Exeter, David Fisher — now a post-doctoral researcher in U of G’s Department of Integrative Biology — found the insects’ social network remains mostly unchanged each year and their social structure is conserved over evolutionary time.

“Along with adapting to the natural environment, you’ve got to be really well adapted to your social environment to survive and do well,” says Fisher.

A chapter of his thesis recently appeared in BMC Evolutionary Biology, the fourth chapter from the work published so far.

Over the past decade, he says, researchers have applied human social network theory to animals.

“Essentially, it’s a useful set of tools to help us measure the social environment and how many connections you have,” says Fisher. “But more than just your immediate connections, how important are those connections to friends of friends?”

Social interactions have been discussed since Charles Darwin’s time, but today the research focus is sharpening. Formerly, “it was very difficult to both collect and analyze the data on social interactions.”

Referring to GPS systems and cameras that capture species behaving naturally in their environment, he says modern technology is allowing us to collect information in more detail.

The University of Exeter study was part of the Wild Crickets project, which has been conducted continuously since 2005.

Fisher and other researchers investigated burrows in Northern Spain, tagging field crickets (Gryllus campestris) and passively tracking them with up to 130 video cameras, 24 hours a day for three months.

He says crickets live for just under a year (spending only their final month as adults), making them easy to follow over multiple generations. As with many species, fighting and mating are typical behaviours observed. In some cases, crickets show more nuanced relationships.

“Two individuals of the same sex will almost never share a burrow,” says Fisher. “Males and females do, but you are much more likely to get eaten if you’re on top when you both go inside.”

Their previous work has shown the burrow-sharing male often loses in the short term but wins in the long term.

“The male might share with a member of the opposite sex because for him, if he gets to mate with the female, it’s worth it. The female will go in first and then the male. It’s a risk but he’s kind of protecting her because if she dies, he will have no offspring. For him, it’s maybe worth it to give up his life if she survives and bears his offspring.”

The researchers used software (exponential random graph models) developed within the past five years to study connections between individual crickets and predict their social networks.

“We can put all of these different factors in one model to predict the network and, hopefully, get a really good understanding of why any animal has the social structure that it does,” Fisher says.

“They have little tags on their backs, so you do know these individuals,” he says. “You might say, ‘Oh, this one again, I’ve seen you and you’re getting around.’ Others you might see immediately eaten by a robin and you think, ‘Unlucky.’”