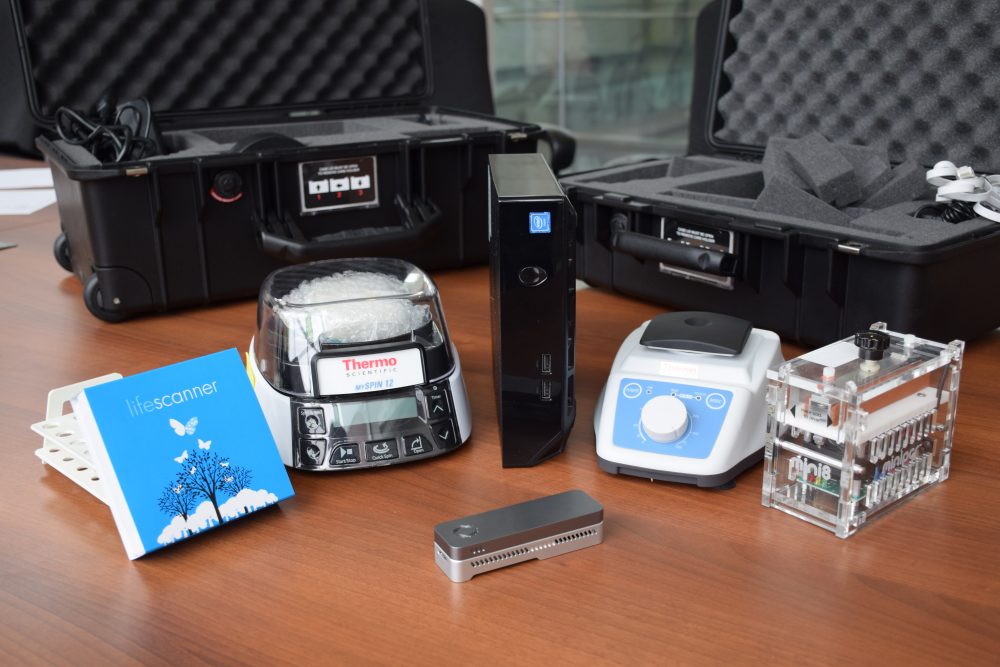 Lab in the Box: Security gates, grocery stores and hospitals are just some of the places where DNA barcoding will become an everyday tool. The cutting-edge technology for identifying species is moving from the lab into the real world. (Photo: University of Guelph)

Airport security gates, grocery stores and hospitals are just some of the places where DNA barcoding will become an everyday tool. The cutting-edge technology for identifying species is moving from the lab into the real world.

Developed at the University of Guelph, DNA barcoding is becoming mobile and going global. Commercial applications that can fit inside a small suitcase or in the palm of the hand are currently being piloted around the world and fine-tuned at U of G’s Biodiversity Institute of Ontario for planned release this year.

Wildlife officers, food fraud investigators and environmental scientists are among the early adopters of DNA-based species identification technologies that are now being deployed in the field.

The Lab in the Box, developed by Sujeevan Ratnasingham, a computer scientist and associate director, informatics, with U of G’s Centre for Biodiversity Genomics (CBG), was introduced last November at a DNA barcoding conference in South Africa. The tech can immediately identify species in critical situations.

At the same time, Prof. Robert Hanner, Department of Integrative Biology, and also with CBG, is poised to release an environmental DNA (eDNA) system that is especially focused on detecting species at risk in water samples containing DNA from various organisms.

Steven Newmaster, professor in the Department of Integrative Biology, is also working to commercialize the University’s DNA barcoding technology, finding an important niche for it in the food manufacturing sector.

The underlying purpose of DNA barcoding is to provide a DNA-based identification system for the world’s species. Its uses are considered illimitable, but one of the most important is as a tool for protecting and preserving Earth’s biodiversity.

Species decline and extinction is one of the most pressing worries on the planet, according to the World Wildlife Fund, which released its Living Planet Report last year.

The study found half of the more than 900 species examined in Canada are in decline. Globally, 58 per cent of the 3,706 species studied declined between 1970 and 2012, with most populations now less than half the size they were 42 years ago. 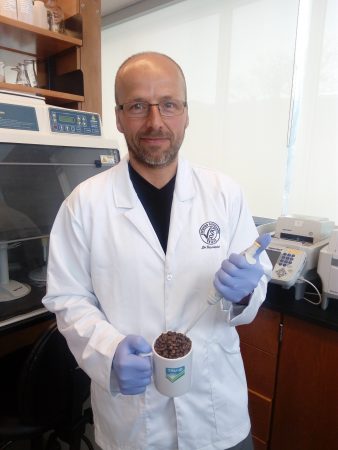 The challenge is to find ways to reverse the rapid erosion of biodiversity that has resulted mostly from human activities, says Hanner.

Innovators like Hanner and Ratnasingham are leading the charge to use U of G’s DNA expertise for biodiversity preservation. They’re also exploring its utility as a powerful learning tool, a consumer safeguard and a new way to improve the science of species identification and classification.

Nearly 15 years ago, integrative biology professor Paul Hebert proposed the use of DNA sequences as “barcodes” for a new global identification system for organisms.

His goal was always to make DNA-based species identification science a hand-held technology. Commercializing it has taken time, but U of G scientists are now ready to show the world how DNA barcoding can save time and money while protecting consumers and species at risk.

Ratnasingham’s Lab in the Box is a miniature version of a DNA testing laboratory. Its forerunner — the Lifescanner consumer kit distributed to more than 2,000 users around the world — is a small but essential component of this new DNA detection system in a box.

Lab in the Box can immediately identify species in hospitals and food markets, or at shipping docks and airports – all settings where rapid detection could mean life or death for humans, or where evidence of poaching, smuggling and trafficking in endangered species could be gathered.

“Information at the right time makes a lot of difference,” says Ratnasingham.

“Biodiversity information is really diverse, and getting it to people and removing that barrier of not knowing is really what this is about.”

The Lifescanner kit – an attractive little box containing four sample vials and a user-friendly but highly sophisticated smartphone app – was developed by Ratnasingham and his associates. 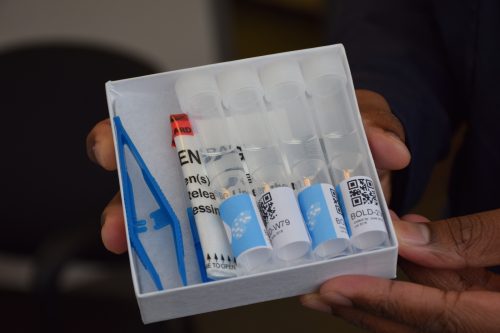 Users mail the vials containing samples for analysis to the CBG. Results are sent about a week later to the user’s cellphone and placed on a biodiversity map. The map provides an ever-expanding picture of the many species in a locale.

Ratnasingham says user curiosity and concern are what drive the Lifescanner process.

“It asks the question, what happens when you put technology in the hands of people and let them solve problems? Amazing things happen.”

He expects that Lifescanner will bring the rapidly advancing field of genomics to classrooms and libraries.

The kits are in all 36 branches of the City of San Diego library, in the investigative toolbox of wildlife enforcement officers in South Africa, and in the hands of Canadian schoolchildren and consumers.

The David Suzuki Foundation distributed 300 of them to volunteers to study the mislabelling of food in grocery stores, says Ratnasingham. Together with the Let’s Talk Science seafood market survey project that is being conducted with LifeScanner, the kit is enabling citizen science at an unprecedented scale.

Lifescanner has been used to detect a bot fly infection in a traveller and to identify mystery meats that turned out to be alligator and turtle. Sasquatch hunters have even turned to using the DNA sampler.

When the various processes involved in Lifescanner – placing a sample into a vial of solution and sending it to a sophisticated lab for analysis – are miniaturized and made portable, you get Lab in the Box.

Ratnasingham introduced it during an international barcoding conference in Johannesburg, South Africa, in November; he hopes it will be commercially available in 2018.

While the Lifescanner process takes a few days for species identification, Lab in the Box provides “right-now answers,” he says. “And it is about testing anything. We want to solve real-world problems.”

The system contains a computer, a PCR machine for running eight samples at a time and the world’s smallest DNA sequencer – about the size of a standard harmonica – which feeds data back to the server.

“This basically takes the lab out of the lab and puts it in an airport or in the classroom,” he says. “It would essentially give them everything they need to go from sample to answer.”

The Lab in the Box is intended to cost about US$10,000, compared to full labs costing millions of dollars. 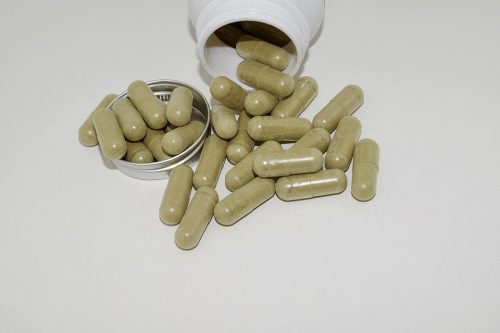 In like fashion, Newmaster has spun DNA barcoding into an application used to authenticate food products. In an increasingly complex and pressurized supply chain, it is becoming more common for ingredient contamination or substitution to happen in the production of food, says Newmaster.

Newmaster, in partnership with Hanner, has started a biotech company based in Guelph called TRU-ID, that offers a certification program for food companies, including ones in health food and nutraceutical industries. The main aim of the program is to help these companies authenticate the ingredients in their products using DNA barcoding.

Products that achieve certification will have the TRU-ID stamp of approval on their packaging – a mark of ingredient authenticity. Newmaster and Hanner are working to miniaturize the application to the level of hand-held, consumer-level scanners.

“Some of the work we’ve been focused on in my lab is to develop a hand-held device with on-site testing capability for environmental DNA for species at risk,” Hanner says. “Traditionally, the environmental consultants would go out and do dip-netting or electrofishing to look for the presence of these animals. But those methods can cause stress and mortality on the very species we are looking to protect.”

Traditional methods, he says, are labour-intensive, often fail to detect rare species and can disrupt the ecosystem. The eDNA approach causes no stress to organisms or disturbance to the environment, he says.

“The ability to actually passively detect them will really help us to better understand whether their ranges are contracting or expanding.”

Quick detection of such species can speed up environmental assessments and minimize the impacts of activities like new natural resource extraction projects or bridge construction, Hanner says, adding that the results of eDNA testing can help ensure that such projects are carried out in a more ecologically sensitive manner. 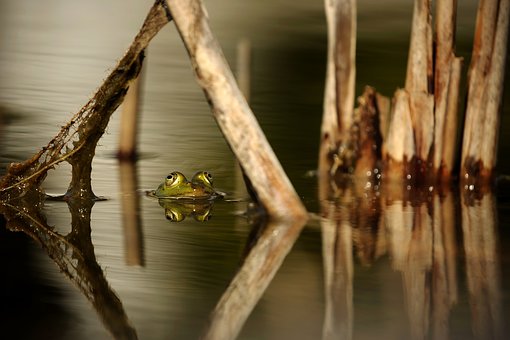 He and his team have assembled a point-of-need eDNA detection platform that can be carried like a backpack into the wilderness, onto proposed construction sites or into the field after natural disasters. Two instruments – a battery-operated water pump and a hand-held unit – are deployed to support the use of specific molecular assays designed for use in the field.

The eDNA method uses a pump with a fine filter to extract and process a mixture of DNA from a body of water. The chances are very good that whatever life form lives in the pond or river will be represented by its DNA in the water sample.

Once the pump’s filter undergoes a DNA extraction process, the extract is tested using the hand-held device to search out the targeted DNA. The device interfaces with a cellphone so that information can be wirelessly transmitted, stored and shared. It takes about an hour for the device to identify the target species.

“If what we are trying to do in a socio-economic context is to have a rapid, accurate and cost-effective approach for detecting target species, then sometimes less is more,” Hanner says, adding that benefits include less laboratory-based testing, savings in time, money and equipment, and pinpoint detection for a single species.

The eDNA platform can be used wherever a specific aquatic species at risk or a keystone or invasive species needs to be detected in a water source. The system is being offered by the spinoff company Precision Biomonitoring, which has licensed U of G’s technology.

Along with funding from industry partner Stantec, Hanner received a Natural Sciences and Engineering Research Council of Canada Idea to Innovation grant and an Ontario Centres of Excellence grant to expand the catalogue of assays to include not only species at risk but also invasive alien species and other valued ecosystem component species.

The technology has been used to detect the Jefferson salamander in ponds in southern Ontario and to track the fish species redside dace and other aquatic species at risk in Ontario and elsewhere across Canada.

When it comes to most species at risk, there is a general data deficiency, Hanner adds. “This tool will support the habitat occupancy testing needed to correct this deficiency and support sound, evidence-based decision-making.”

The vision for DNA barcoding has always been to put the science into people’s hands in the form of practical technology for real-world situations, says Hanner. That is beginning to happen.

“With the barcode reference sequence library, we can start to use our knowledge of taxonomy to authenticate food products, identify fraud, and help support the detection of invasive alien species and species at risk.”