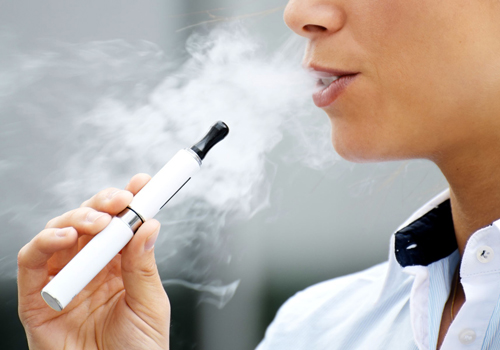 It’s not exactly the rugged cowboy icon from the late 1990s all over again. Today it’s images of skimpily-clad women, the glamorous “in crowd” and lipstick on a shirt collar that have resurfaced in lifestyle ads promoting e-cigarettes in publications from Maxim and Sports Illustrated to Cosmopolitan and Rolling Stone.

To Guelph marketing professor Timothy Dewhirst, none of those ads looks like an attempt to encourage people to quit smoking.

Just the opposite, he says: a product touted for smoking cessation is being marketed with the same lifestyle messages and images that were popular decades ago in conventional cigarette advertising.

These ads are only likely to make cigarette smoking acceptable, says Dewhirst.

That was his message this past summer in hearings held by a Quebec government committee examining Bill 44. The bill is intended to tighten restrictions on sales and promotion of tobacco products, including electronic cigarettes.

“There has been confusion over whether to regulate e-cigarettes as tobacco products or as something distinct,” says Dewhirst, who was quoted extensively in the La Presse article supporting the new anti-tobacco bill being considered in Quebec.

Referring to disputes about the comparative harm reduction benefits and health risks of e-cigarettes, he says his submission at the hearings was “valuable for them to get a marketing perspective about the unintended consequences of giving e-cigarettes an advantage.”

Electronic cigarettes are promoted as less harmful than conventional tobacco products and are intended to help people quit smoking or at least to cut back on tobacco use.

Dewhirst fears that by normalizing smoking, e-cigarettes ads will end up encouraging smoking rather than curbing the practice.

Electronic cigarettes are also being marketed through signs in convenience stores and gas stations. Dewhirst displays an example in a photo taken in a convenience store within steps of the U of G campus.

Tabled earlier this year, Bill 44 would restrict the use of electronic cigarettes as with other tobacco products. Ontario law also restricts the sale and use of e-cigarettes.

Dewhirst has studied tobacco marketing and public policy for more than 20 years. He has provided expert testimony on tobacco litigation in Canada and abroad, and helped develop guidelines for the World Health Organization’s Framework Convention on Tobacco Control.

Has he ever smoked?

“I’ve been asked that in deposition by tobacco lawyers,” he says. “I puffed on a cigarette to impress a woman at a bar as a university student, but I’ve never been a smoker.”

A day after his appearance in Bill 44 hearings, CBC Radio interviewed Dewhirst about the potential use of advertising on National Hockey League jerseys. The league has signed a deal for Adidas to make team uniforms, and perhaps add its trademark to jerseys, starting in 2017.

Dewhirst says ads appearing on jerseys might present a quandary for fans who support the team but not the advertiser. How, for instance, to reconcile Nike’s sponsorship of Canada’s Olympic men’s hockey team with Sidney Crosby’s endorsement of Reebok?

Says Dewhirst, a longtime fan of the Toronto Blue Jays and the Montreal Canadiens: “A uniform is sacred ground.”