U of G Professor Emeritus Appointed to Order of Canada

David Waltner-Toews has spent the bulk of his career asking why.

The epidemiologist and professor emeritus at the University of Guelph devoted his energy to a decades-long, award-winning career in science, published his writing in a variety of fiction, non-fiction and poetry volumes, and has now been appointed an Officer of the Order of Canada.

Honoured “for his leadership and expertise in ecosystem approaches to health, and for supporting development worldwide,” Waltner-Toews, now retired and living in Kitchener, Ont., said the Order of Canada’s official motto – “the desire for a better country” – aligns with his own body of work and the way he approaches it.

U of G and the One Health approach

At U of G, Waltner-Toews’s work as a professor, epidemiologist, veterinarian and researcher at the Ontario Veterinary College was framed as what was then called ecosystem health. It laid much of the groundwork for One Health – the notion that all living things are connected and that ensuring the health of each is to consider the health of all. It was a unique way of looking at things back when Waltner-Toews and former U of G dean Ole Nielsen began exploring these ideas.

“It requires a different way of thinking,” said Waltner-Toews, explaining that the approach encompasses humans, animals and ecology. “How do you link those things together? We haven’t been as good at that because it’s not the kind of thing you can drag into a lab. It means talking to a whole lot of other people that you don’t normally talk to.”

Rather than work from a set of fixed ideas, he said, One Health continues to unfold as we learn more about the world and its species and how, where and why they intersect as they do.

Waltner-Toews calls it “honouring our peripheral vision” by taking the time to consider what is happening just outside one’s focus.

“When people think differently, and start asking questions, then we start getting a better world,” he said. “That’s been my passion for a few decades already, to try to understand how that works.”

Science often sets out with a specific goal, he explained. But Waltner-Toews often found himself asking, “why?” when considering how research impacts day-to-day living in a broader context. 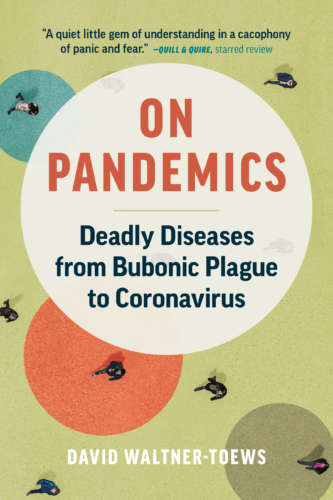 The author of On Pandemics: Deadly Diseases from Bubonic Plague to Coronavirus said the pandemic laid bare exactly what he and many of his international colleagues had been talking about for years: that animals, humans and ecology are connected. In the case of COVID-19 – a zoonotic disease, transmissible between animals and humans – so, too, are social and political factors.

“These larger issues are more policy-related or societally related,” he said. “Those are the ones that interest me. In the long run, that’s where sustainability is.”

A forthcoming book, A Conspiracy of Chickens: A Memoir, tells the story of Waltner-Toews’s own journey with his backyard chickens. The avian flu researcher taps into the experience of urban ecology while exploring the bird’s history and relationship with humans.

These days, the founding president of Veterinarians Without Borders uses his global relationships to build networks among former students and colleagues, helping them to link their work in wildlife ecology, zoonotic diseases and public health. “Being able to facilitate this work among a new generation of researchers, community workers, and students gives me a sense of hope,” he said, and “corroborates some of the things I was thinking” years ago.

“What this honour does is recognize that these ideas I was working with decades ago offer an important contribution to solving some of the complex challenges we face today.”