That was a key challenge offered to University of Guelph graduands by Dr. Mary Anne Chambers, who was installed today as the University’s 10th chancellor.

A former Ontario cabinet minister and a longtime U of G champion, Chambers was installed during the June 14 convocation ceremony for the College of Engineering and Physical Sciences.

Convocation ceremonies for all seven U of G colleges are taking place this week.

In her installation address that ranged from discussing U of G’s focus on sustainability, to the highlighting of earlier prominent graduates, Chambers underlined the importance of harnessing education to address key global challenges. 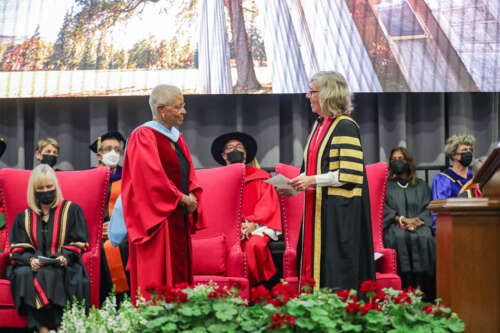 “I want you to aspire to greatness,” said Chambers, during the ceremony held in the Guelph Gryphons Event Centre. “Most of all, I want you to make your lives matter because our world truly needs you to do that.”

President Dr. Charlotte Yates said: “On behalf of all of us at the University of Guelph, I am delighted to offer my warm congratulations to Dr. Chambers as she is installed as our community’s tenth chancellor.

“Dr. Chambers brings immense talent, rich experience and a deep personal commitment to our community. We are incredibly fortunate to have her serving as an outstanding ambassador for the University through her role as chancellor.”

In her installation remarks, Chambers recalled chairing a working group on responsible investing during her term on the University’s Board of Governors from 2010 to 2016.

Referring to presentations and discussions on the environmental, economic and social impacts of fossil fuel-driven climate change and the health implications of elevated pollution on Indigenous communities worldwide, she said, “I have long been impressed by ways in which this University community has been demonstrating the importance of sustainability – not a new concept but one that is now the focus of heightened attention and a greater sense of urgency.”

Chambers linked those discussions to the University’s longstanding focus on bettering society, captured in the 1964 University of Guelph Act and in the definition of sustainability adopted by U of G from the 1987 World Commission on Environment and Development.

“Addressing climate change and food insecurity has become increasingly critical to the survival of our planet. Cybersecurity has also risen to greater prominence,” she said. “The College of Engineering and Physical Sciences is well positioned to lead thinking and disseminate knowledge in these areas.”

She also shared her interactions with five earlier grads whose achievements, she said, might serve as examples for this year’s new alumni, as follows: 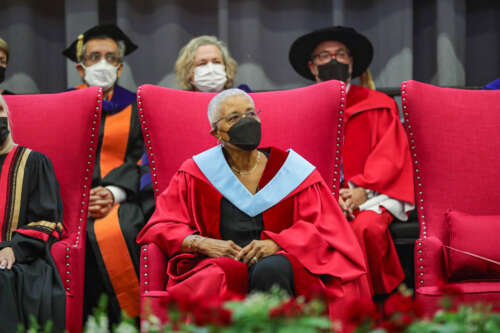 Paraphrasing Fearon, Chambers told U of G graduands: “The journeys we travel give each of us a unique view on our world and, through it, we are motivated to make it bright for others as well.”

She mentioned her own upbringing in Jamaica and the decision she made with her husband, Chris, to move to Canada more than 40 years ago.

Chambers was formerly a senior vice-president at Scotiabank. Elected to the Ontario legislature in 2003, she served as minister of training, colleges and universities and minister of children and youth services.

She was named to the Order of Ontario and has received the Queen Elizabeth II Golden Jubilee and Diamond Jubilee medals.