Ondose. In Ojibwe, it means “to walk from a certain place.”

Brad Howie, the former Anishnaabe environmental educator at the University of Guelph Arboretum, knows how the story of a journey is just as important as its culmination. In his case, the journey was his master’s degree in environmental science, which took place as U of G was welcoming its first students to the new bachelor of Indigenous environmental science and practice (BIESP) program.

To honour and celebrate the work of Indigenous Elders and Knowledge Holders, U of G faculty, staff, students and others who have brought both Howie’s work and the University’s progress to this place and time, a gathering was held on the grounds of the arboretum in June, during Indigenous History Month.

The gathering, with a ceremonial sacred fire, opened with drumming, followed by a land acknowledgment and words of welcome from Howie.

“It’s a tremendous achievement,” Howie said of the BIESP program and Mtigwaaki Trail, an interpretive walk he created at the Arboretum as part of his studies.

“When it comes to the environment, it crosses political, racial, scientific and environmental boundaries, it is truly an interconnected and interdisciplinary place,” he said. “Indigenous ways of knowing have a special and important place in our understanding of the environment and how to live in it.”

U of G takes steps on the road to reconciliation

Howie credited U of G with taking steps on the road to reconciliation, after decades of effort to bring BIESP to fruition. 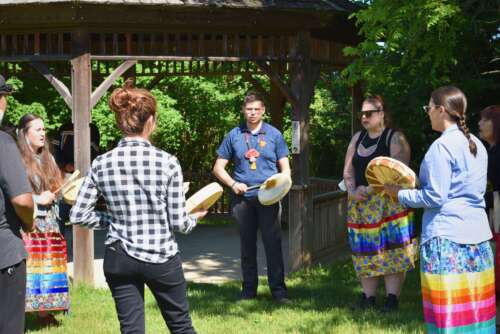 He noted, however, that the process needs to be undertaken with authenticity and patience.

Elder Miptoon, a councillor from the Chippewas of Nawash Unceded First Nation and member of the President’s Advisory Committee on Indigenous Initiatives at U of G, who is involved in the new program and whose knowledge Howie said greatly informed his own education, said the day was a special one for U of G and also for Indigenous peoples.

“No one’s intellect is better than anyone else’s,” he said. “We’ve got to learn that we have to walk together, not only as lecturers but also as friends.”

Elder Miptoon spoke of the value of taking students outdoors as part of the learning process. “I’m an Elder that likes to teach in the field,” he said. “I have no classrooms, but the field, the woods and the water are my classrooms, the ponds are my classrooms. And my microscope is the very aspect of nature – what I see and what I feel.”

That sentiment was echoed by students and faculty who also shared their experiences of learning in the new program, which Elder Miptoon called “one of the best things that has happened to this University.”

“We only have one crack at this world,” he said. “Have an influence on it.”

Howie’s co-advisers, Dr. Jesse Popp and Dr. Andrew Young, also spoke during Ondose, highlighting the changes traditional Western education is undergoing as Indigenous ways of knowing and learning and being are woven into its methods.

As a student, Popp said, she was often told, “there was no such thing as Indigenous science” or “you can’t do things this way.” Eventually, she came to learn, “the barriers that I saw were only perceived. They were really just challenges.”

Change is happening, she said, referencing BIESP. “It’s an incredible time to be involved.”

Following the speakers, attendees were invited on a guided walk through the Mtigwaaki Trail. In Ojibwe, Mtigwaaki means “among the trees.” Signs located along the trail ask users to consider their own relationship to the land, the forest and nature.

At its core, this work is about being respectful, appropriate and authentic, Howie said.

“The Earth can live without humans, but humans can’t live without the Earth. We are human and have a relationship with everything. It’s important to have that shift in the way you think.”