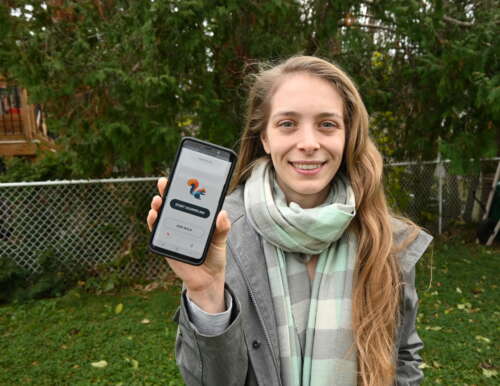 Plenty of people are birdwatchers. But squirrel watchers?

Encouraging people to pay closer attention to these charismatic rodents as a potential “gateway” to nature is the goal of a new mobile app developed by University of Guelph students.

The Squirrel Life Community Project, an app for capturing behaviour of squirrels worldwide – including chipmunks, prairie dogs and other members of the Sciuridae family – will be launched March 26.

A community event to be held from 9 a.m. to 3 p.m. near the U of G Arboretum Centre will provide family-friendly information about Squirrel Life, including access to the project app.

“Squirrels are charismatic,” said project manager Elizabeth Porter, a master’s student in the College of Biological Science and a regular backyard observer of the animals. “They occur in some form all over the world. Squirrels are a really great way to introduce science, biology and observation at different levels.”

Users at home, out walking or almost anywhere else can use the new software on their phone or other mobile device to enter observations of squirrel behaviour, from feeding and foraging to caching food to chattering to chasing one another up and down trees. The app allows the user to include their GPS location for squirrel sightings.

All the information captured on the app will be available for users – from researchers to conservation officers to members of the general public – to look up the collected squirrel observations.

Porter began the project shortly after the initial COVID-19 lockdowns in spring 2020.

Referring to restricted lab and fieldwork, she said, “I was noticing students were losing experiential learning and research opportunities. Students lacked a sense of community and had more mental health and well-being issues. I was looking to engage students.”

Putting together her initial plan to study squirrel population and dynamics with emerging interests in science education and citizen science, she came up with an idea: Why not encourage others to pay more attention to these ubiquitous animals?

“Squirrel Life became an experiential learning program that allowed students to go for a walk or sit safely outside or look out the window and just observe squirrels,” said Porter. “It’s like the gateway animal to nature observations.” 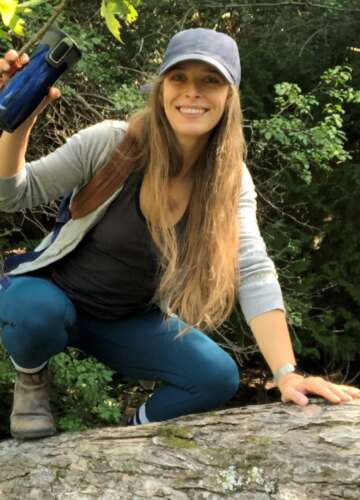 Elizabeth Porter on a squirrel hike

She said squirrel-watching is accessible to many people. As well as being active during the day, the creatures are large enough to see clearly and identify. Compare that to birdwatching, where the quarry may be smaller or more distant or elusive.

“If you’re not an expert birder, you may not know what you’re looking at.”

Besides, adds Porter, squirrels are clever and fun to watch. For instance, her own backyard visitors practise “deceptive caching” to avoid losing food to rivals.

“They’ll pretend to bury their food but if you watch closely, it’s still in their mouth and they’ll run along before burying it. They’re tricking the other squirrels.”

Unlike many other citizen science projects, Squirrel Life emphasizes not simply counting creatures but recording their behaviour. “We’re providing an opportunity for participants to describe what they’re seeing, which will provide better data.”

Porter said the project is also intended to encourage people to engage more generally with nature.

Start observing squirrels and you become more mindful of other things around you, including sounds and smells, she said. From there, it’s a short step to nurturing more environmental awareness.

“Those actions make people more invested in their natural surroundings. When you spend more time outside, you notice more, maybe you care more about picking up garbage or making more sustainable choices.”

To develop the app, Porter has enlisted several undergrad students for internship and co-op placements; last fall, she gathered feedback from students in an introductory biology class.

Besides working with her graduate supervisors – Dr. Shoshanah Jacobs and Dr. Karl Cottenie, Department of Integrative Biology – she has involved Dr. Dan Gillis in U of G’s School of Computer Science.

Nathan Lewis, a third-year student in wildlife biology and conservation, has helped develop the Squirrel Life app and has led squirrel walks. He’s interested in the impacts of increasing urbanization and human contact.

“It’s very important for us to look at how that is affecting wildlife around us so we can preserve ecosystem level functioning and the species themselves,” said Lewis. “Squirrels are an ideal candidate for this type of research because they are commonly seen in urban areas, so they would be the first to be affected in an obvious way.”

The app will be available in English only. Organizers will make it open source, meaning that users may modify it for other languages or features.

Funding came from the Guelph Institute for Environmental Research and from Chantiers jeunesse, a Montreal-based program that supports social entrepreneurship programs.

Beginning March 26, users will initially have access to an interim data collection program while the project organizers complete refinements to the Squirrel Life app. Later this spring, users will be able to switch to the official program.