That dual benefit may surprise anyone who believes that methane-belching livestock are responsible for clouds of climate-warming gases collecting in the atmosphere. Methane is about 30 times more potent as a greenhouse-warming gas than carbon dioxide, said Dr. Christine Baes, an animal biosciences professor in U of G’s Ontario Agricultural College (OAC) and head of the Resilient Dairy Genome Project (RDGP).

But that statistic tells only part of the story.

Clearing up misconceptions about livestock emissions is an unstated goal underpinning this dairy project, which brings together varied U of G experts with dozens of collaborators at other universities and industrial partners in Canada and worldwide.

The team is using genetics and genomics tools to breed cattle with enhanced health and fertility that process their feed more efficiently. Improve a cow’s feed efficiency, and you can reduce the animal’s methane emissions – produced mostly from burping out the gas – in the process.

Up to nearly one-third of a cow’s feed efficiency is dictated by its genes.

“If one cow produces 300 grams of methane per day versus another cow with 600 grams per day at same level of milk production, it’s clear that we want to keep the cow that produces 300 grams and include her genes in future generations,” she said.

“Genomic selection provides an elegant way of breeding cows that are more resource-efficient. They eat less but are just as healthy, just as fertile, and they produce just as much milk, but they do it with less resources.”

In an earlier project led initially by Dr. Filippo Miglior and later by Dr. Flavio Schenkel, Director of the Centre for Genetic Improvement of Livestock (CGIL) in the Department of Animal Biosciences, researchers at U of G and their partners already developed a genetic evaluation system for feed efficiency and the ground work for future methane emissions evaluations. 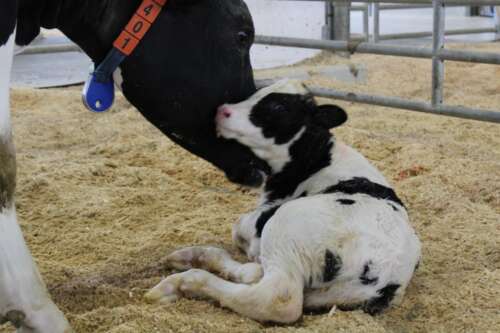 A mother and her calf at the Ontario Dairy Research Centre at the Elora Research Station. This state-of-the-art facility is leading dairy innovation through education and collaboration and is a partnership between the Agricultural Research Institute of Ontario, OMAFRA, the University of Guelph and the Ontario dairy industry.

That initiative, called the Efficient Dairy Genome Project, was funded by various governments and the dairy industry.

The resulting evaluation system was implemented by Lactanet Canada this past spring for Canada’s dairy cow breeders. The dairy sector contributes roughly $20 billion a year to the country’s GDP.

Further increasing feed efficiency and reducing methane emissions is part of the goal of the new project led by Baes and three principals from other Canadian universities.

That meshes with the pledge made by more than 100 countries at the November COP26 climate change conference to reduce methane emissions by 30 per cent by 2030. Emissions currently come from varied sources, including burning of fossil fuels as well as decomposition in landfills and wetlands.

And that’s part of the benefit of focusing on livestock emissions through this project, said Baes.

When it comes to greenhouse-warming effects, not all methane is the same.

Biogenic methane is part of a natural cycle that involves livestock. As part of the cycle, plants absorb CO2 to make carbohydrates like cellulose, a key feed source for ruminants like cows.

After cattle break down cellulose, they burp methane into the atmosphere. It takes about a decade for that methane to change to CO2, which is then ready to be recycled back into plants.

Compare that with so-called fossil methane, which starts as fossil fuels dug out of the earth and ultimately exits your vehicle’s tailpipe. The resultant carbon dioxide in the atmosphere may take more than a thousand years to re-enter geological reserves. 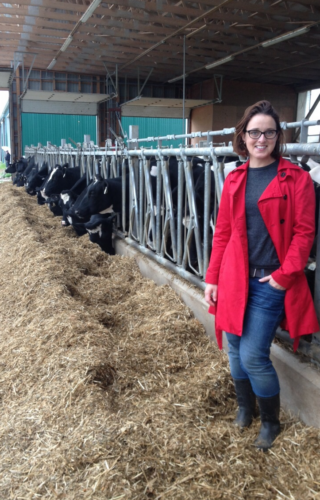 “Fossil methane represents a new addition to the gas already in the atmosphere,” said Baes, who holds the Canada Research Chair in Livestock Genomics. “The cool thing is that although livestock emits methane, if you can reduce the methane emitted from livestock, you can technically induce net cooling as opposed to net warming.

“If we can breed more efficient cows, we can contribute to a net cooling effect.”

That benefit will be further heightened here in North America than in other livestock-producing parts of the world.

“We are considerably more efficient and thus contribute significantly less methane here,” she said. “But we can also do our part to achieve an overall reduction. Our project is one of many which can help to do so.”

Under the RDGP begun in 2020, the research team also aims to incorporate other important genetic traits including tolerance to heat stress, disease susceptibility and calf health traits.

The project brings together Baes and Schenkel along with experts in a variety of fields across U of G, as follows: Dr. Getu Hailu, Department of Food, Agricultural and Resource Economics, OAC; Dr. Angela Cánovas, Dr. Vern Osborne, Dr. Niel Karrow, Dr. Filippo Miglior (adjunct professor with CGIL, also on staff at Lactanet), and Dr. Dan Tulpan, all in the Department of Animal Biosciences, OAC; and Dr. Dave Kelton, Dairy Farmers of Ontario Dairy Cattle Research Chair in the Department of Population Medicine in U of G’s Ontario Veterinary College.

Also involved are U of G students, post-docs and research associates. Industry partners and funders include Genome Canada, the Dairy Farmers of Canada, Lactanet, Ontario Genomics, Genome Quebec, Genome Alberta, and Genome BC, as well as OMAFRA, the Ministry of Colleges and Universities and a number of other provincial funding bodies outside of Ontario.

“This University of Guelph-led project is another great example of how researchers at Canada’s food university are leading the way in an absolutely critical effort to find sustainable solutions for feeding a growing world,” said Dr. Malcolm Campbell, vice-president (research).

“This project combines U of G expertise in animal biosciences and environment to ensure food security while mitigating climate change impacts. It’s a prime example of improving life at home and around the world.”

Other U of G researchers whose work involves livestock, environment impacts or greenhouse gas emissions include:

Dr. Jennifer Ellis, Department of Animal Biosciences and a member of the University’s Centre for Nutrition Modelling, uses data to develop mathematical models to improve livestock performance, product quality, animal health and welfare, and the environment.

Working at U of G’s Ridgetown Campus, SES professor Dr. Brandon Gilroyed studies anaerobic digestion technology to reduce methane emissions from animal manure and organic wastes. Instead of allowing organic material to decompose in manure storage pits or landfills, he uses controlled conditions and combusts the methane produced in the process.

“Combustion releases CO2 to the atmosphere, but since CO2 is a less potent greenhouse gas than methane, there is a net benefit, and the process is considered carbon neutral,” he said. Gilroyed aims to provide anaerobic digester technology for on-farm use.