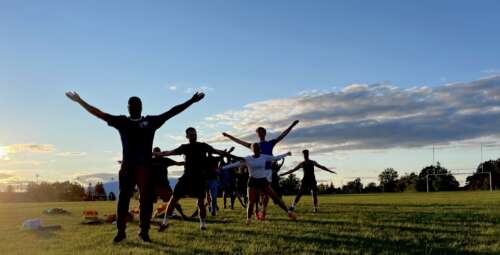 When University of Guelph student Jacob Maxwell was searching for a name for the LGBTQ2SIA+ fitness group he was starting, the word “telos” came to mind. Derived from the Greek, the word has a few meanings, including an ultimate end, the inherent purpose of each thing, and a person’s potential.

It seemed to him like the perfect word for a group dedicated to giving LGBTQ2SIA+ people a safe, fun, supportive space to pursue their fitness potential and achieve a greater sense of empowerment. Maxwell said his own experience pursuing fitness goals at the U of G empowered him to start the group Telos Athletics in August.

“The University was part of my journey toward being comfortable with my own fitness, to the

point where I felt secure about sharing that in a group and leading others in their own fitness journey,” said Maxwell, who studied animal biology at U of G before entering veterinary medicine at the Ontario Veterinary College.

“The idea behind Telos Athletics was to create a space specifically intended to be an affirming athletic space for queer people. It’s a space for them that says, this is for you.”

Maxwell set his expectations for Telos Athletics on the low side, thinking two or three people might show up at the weekly workouts that started in August. But as many as 15 people have turned up each week, with 44 registered so far.

Workouts are scheduled in 10-minute increments of stretching, running, strength training and track and field activity. There is also free time to use the track and field equipment that has been donated to the group.

The U of G campus, he said, has an accepting and diverse culture, and that was reflected in the University’s Fitness Centre. 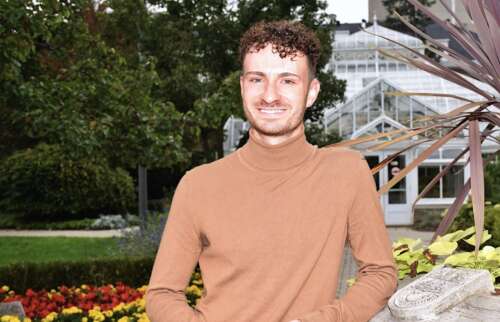 “I felt so comfortable in the gym,” he said. “It’s a beautiful space physically and it seemed like anybody and everybody was there working out. The gym felt diverse, and as a queer man who doesn’t necessarily fall into the stereotype of the traditional sporty man, I felt just as empowered to work out in that space as anyone.”

Traditionally, many athletic spaces are the opposite of welcoming for queer people, he said. They can be rife with toxic masculinity and unsafe for LGBTQ2SIA+ people. Harassment and abuse are not uncommon.

It has only been in recent times that a small number of elite athletes have begun speaking openly about their queer identity, Maxwell said. And that is a clear indication that it is still not safe to do so. Toxic masculinity remains common in the athletic world, he said.

“The fact that Carl Nassib became the first openly queer active player in NFL history, only just this year, is an indicator of how difficult it is,” Maxwell said. “There are obviously more queer people in the NFL than just this one, but it’s 2021 and only one has felt brave enough and empowered enough to open up about it.”

He said his own experience growing up amidst toxic masculinity in school, especially in gym class, drove him to want to “reset the balance” in whatever way he could.

“It feels really amazing to be doing this,” he said. “And the fact that people are interested is a huge plus. We are having a lot of fun.”

Telos Athletics succeeds or fails on the basis of people joining in and forming a community of support, he added.

“And it certainly feels like Telos has taken on a life of its own now.”