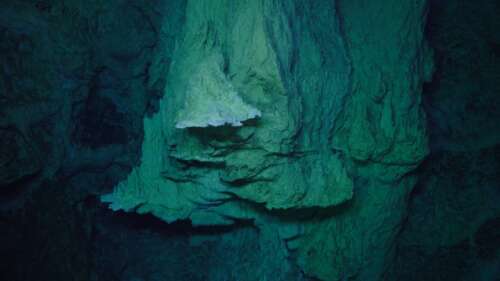 The Lost City Hydrothermal Vent field sits on top of the Atlantis Massif, a 4-km-tall underwater mountain in the middle of the Atlantic Ocean. Scientists have documented microscopic organisms living in the mantle-derived rocks. Photo credit: Woods Hole Oceanographic Institution and the National Science Foundation

A study of microbes beneath the world’s seabed hints at the diversity and ecological importance of bacteria living in a little-known habitat that makes up one of the largest biospheres on Earth, according to a new study led by a University of Guelph researcher.

Captured through the first-time use of new seabed drilling technology during International Ocean Discovery Program (IODP) expedition 357 in an unusual rock formation, the samples may provide insights into what microorganisms are present in the subsurface and how they live, said Dr. Jackie Goordial, who joined U of G in 2020 as a professor in the School of Environmental Sciences.

The research may also offer clues for scientists seeking out microbial life in seemingly inhospitable conditions elsewhere such as other planets or moons in the solar system, Gordial added.

“We have developed tools to study a poorly understood environment that may also be one of the largest biospheres on Earth. That means there are processes happening in the crust biologically that may affect global biogeochemical cycling that we don’t understand,” she said.

Scientists believe life on Earth may have originated in the oceans, where microbes learned to turn chemicals into energy, she added. 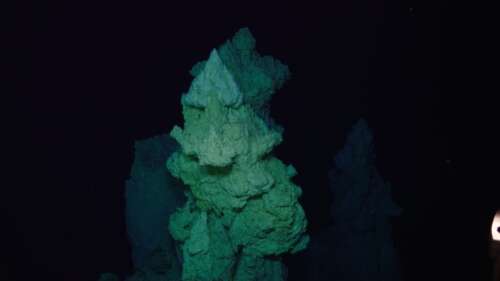 Lost City on the Atlantis Massif

“If we figure out how life exists in these systems on Earth, it may give us hints about what to look for and how in other places,” Goordial said, adding that similar processes are thought to have occurred on an earlier, wetter Mars.

The paper was published recently in mBio, an open-access journal of the American Society for Microbiology.

While a post-doc at the Bigelow Laboratory for Ocean Sciences in Maine, Goordial led genomic analysis of microbes collected during a seabed drilling expedition in 2015.

The IODP expedition collected samples from the Atlantis Massif, an underwater mountain on the mid-Atlantic Ridge, which bisects the bottom of the Atlantic Ocean from north to south.

Samples were collected from the summit of a 4-km-tall mountain located between 750 to 1,200 metres beneath the ocean surface. The deepest part of the Atlantic lies about 8,500 metres below the surface. Researchers used drills and excavated nearly 16 metres into the rock crust under the seafloor. 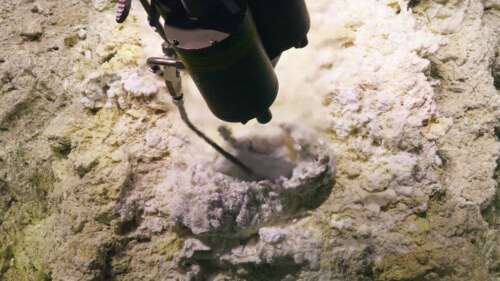 Unique microorganisms live in the hot and ultra-high pH environment of the Lost City hydrothermal vent field sitting on top of the Atlantis Massif, such as the white carbonate chimneys being sampled by a remotely operated vehicle. Photo credit: Woods Hole Oceanographic Institution and the National Science Foundation

Unlike soil samples on land that teem with bacteria, samples from the ocean crust contain few microbes.

Although bacteria live in low densities in the subsurface, their overall numbers are massive because of the sheer amount of ocean crust girdling the planet.

To concentrate those sparse bacterial cells from the samples to examine their genomes, the team developed a new technique, using sophisticated lab technology in ultraclean rooms at Bigelow’s single-cell genomic centre.

These techniques allowed Goordial to sequence the genomes of microorganisms living inside the crust, identifying what microbes were present and what they may be doing.

Genomic approaches were crucial. Because practically none of the microorganisms can be grown in the lab, the only way to understand them is through their DNA.

The team found microbes related to organisms that have been located elsewhere in the subsurface or on the seafloor but not on land or in freshwater. 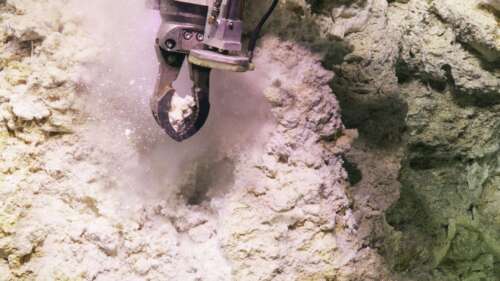 Sample taking at the Lost City on the Atlantis Massif

Goordial found that these microbes can use carbon contained in carbon monoxide and in formate, a simple organic compound associated with the kind of rock and chemical processes at the site.

Importantly, said Goordial, “the microbes in the shallow subsurface a couple metres below the sea floor are distinct from microbes around hydrothermal vents. These are different microbes with different metabolisms.”

“We expected to see a lot of methane-metabolizing genes because of what we see in hydrothermal vents in the area,” she said. “We didn’t see the same types of metabolism in the crust.”

Scientists have extensively studied microbes living around hydrothermal vents on the seafloor, such as the nearby Lost City vents where superheated water bubbles up from Earth’s core. Here, bacteria relying on chemical processes form the basis of a food chain, supporting unique creatures on the seafloor, including worms, fish and shrimps.

The rock at the site initially formed below the seafloor and then was lifted, exposing it to unusual chemical reactions.

Similar rock formations and processes to those in the mid-Atlantic study site are thought to exist elsewhere, including Enceladus, an icy moon of Saturn.

“If we’re going to find life on other planets, we should know what to look for and how life survives in the kind of environments we expect to find there,” said Beth Orcutt, senior author of the study and senior research scientist at the Bigelow lab in Maine.

For example, the ice coating Europa, one of Jupiter’s moons, is believed to overlie oceans whose rocks resemble the seafloor at the expedition site. Referring to the ocean bottom, Orcutt said, “It’s an analogue for other planets and moons.” 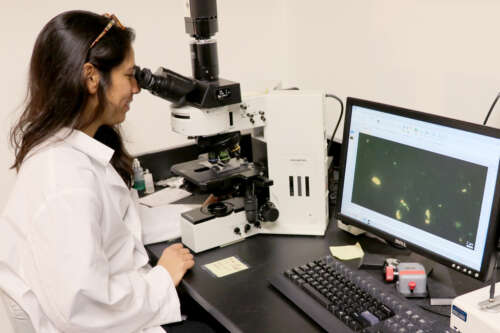 Little is known about how mining might affect microbial communities around the vents or in the crust.

“We know hydrothermal systems have unique species not found elsewhere,” said Goordial, adding that the ocean floor may yield microbes or other creatures with yet-unknown uses in, say, biotechnology or health care.

The U of G professor has also worked with Bigelow researchers on another mid-Atlantic Ridge site where permanent observatories have been installed.

On land, she studies microbes in Antarctica and in Canada’s Arctic. In the Northwest Territories this summer, she will look at how permafrost thaw may cause coastline erosion into the ocean, causing biogeochemical changes that may affect carbon cycling. She will use techniques developed at Bigelow for low biomass systems in the sub-seafloor in her work in the polar regions.