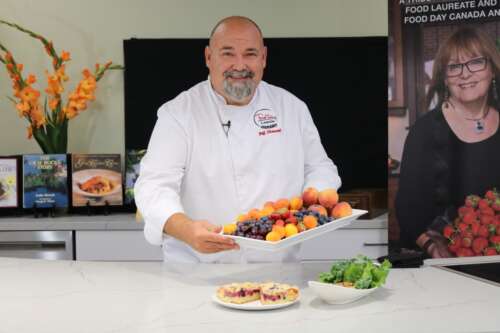 Chef Jeff Stewart honours his mother, Anita Stewart, cooking recipes from her cookbooks in U of G’s new food lab

The Anita Stewart Memorial Food Laboratory at the MacDonald Institute on the University of Guelph campus was the venue for the preparation of two special dishes, both from cookbooks authored by his mother.  Jeff is the first guest to cook in the recently renovated state of the art food lab.

Anita Stewart, an Order of Canada recipient, renowned culinary activist and journalist, author and food historian, passed away on October 29th, 2020, at the age of 73. She was the founder of Cuisine Canada and Food Day Canada and was U of G’s inaugural Food Laureate. She came from a long line of exceptional cooks, learning the art from her mother, grandmother and cooks from coast to coast throughout Canada.

“My mother was a real force in Canada, but also a real force in our family,” said Jeff, who has a Bachelor of Commerce degree from U of G’s Hospitality and Business program. He is a Red Seal certified chef and sommelier and has taught at the University of Guelph, Niagara College and Conestoga College. 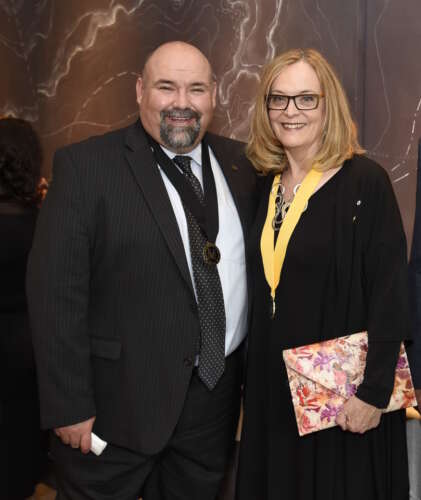 “Mom was great at keeping everybody connected,” he said. “There has been a hole in our family, for sure. The amazing thing is the legacy she left behind and all the amazing connections of people who are supporting what she started. The University of Guelph is a real driving force behind Food Day Canada and they have been there from the beginning.”

Back in 2003, during the bovine spongiform encephalopathy (or “mad cow disease”) crisis, Anita spearheaded a major national event to show the country and the world that Canadian beef was safe. Canada’s Longest Barbecue saw countless participants across the world cooking up home-grown Canadian beef.

That event evolved into Food Day Canada, a day to shine a light on all things Canadian in cuisine. Each year on July 31 Canadians are encouraged to celebrate Canadian food through local shopping, cooking and dining. They can also share their experiences on social media using the hashtag #FoodDayCanada. Last year #FoodDayCanada reached nearly 15 million Canadians online. At 9 p.m. the tower at Johnston Hall on the U of G campus, along with dozens of other iconic sites, including the CN Tower, will light up in red and white for the occasion.

“What she wanted to see was at least one day a year where Canada said, ‘Wow, look at all the amazing things we have right here.’ And quite honestly it is amazing, all the food we are able to produce in this country.”

As a mature student in the 1980s, Anita took a Canadian food course in U of G’s School of Hospitality, Food and Tourism Management. Prof. Jo Marie Powers, author and founder of the Taste Canada Awards, was her professor. 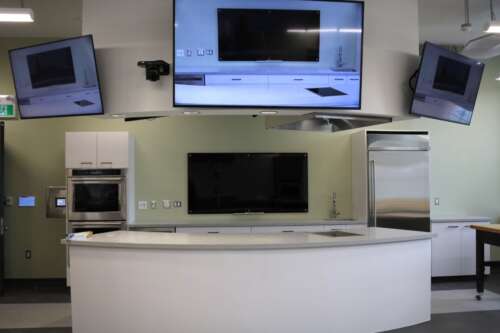 Jeff said his mother was so affected by the course that she dedicated her life to food writing. Her first book, The Farmers’ Market Cookbook, was co-authored with Jo Marie Powers. Anita would go on to author over a dozen other books, all dedicated to Canadian food.

One thing she insisted upon when writing a cookbook, Jeff said, is that every recipe had to have a high probability of being successful. She always triple-tested the recipes before including them in a book.

“What she realized from that course and her friendship with Jo Marie, was that there was a wealth of information about local food, and she found it by going to the farmers’ markets and asking vendors for their favourite recipes, and how they liked to prepare the things they grew,” Jeff said.

Anita discovered that different regions in Ontario had diverse food cultures, farmers from many different backgrounds, and bountiful harvests. As her scope became national, she discovered the same phenomenon across Canada.

“She found an exciting way to look at, think about and respect Canadian culture through the diversity of its food,” Jeff said.

Dr. Statia Elliot, director of the School of Hospitality, Food and Tourism Management, said Anita was a self-described culinary explorer.

“She really believed in food as this rich, diverse, delicious means to connect land and people,” Elliot said. “And as a writer, she crisscrossed the country searching out food, farmers, chefs and suppliers, gathering stories and recipes that, together, defined Canada.” 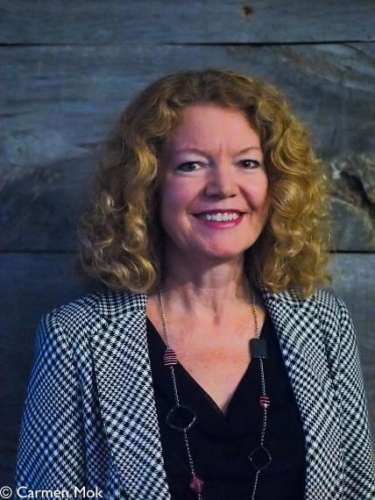 The University is proud to carry on her legacy by celebrating all things food in Canada in the Anita Stewart Memorial Food Laboratory, Elliott added, a facility made possible through a $1.33-million gift from Michel Eric Fournelle, a 1992 U of G graduate and long-time real estate developer and philanthropist. Whirlpool Canada donated top of the line appliances and food preparation equipment. Food preparation demonstrations will be recorded and broadcast using the high-end audiovisual hardware installed in the lab.

Jeff is featured in the first cooking demo in the lab and it will be available on Fooddaycanada.ca. He prepared two Canadian dishes, one from Anita’s first cookbook, The Farmers’ Market Cookbook and the second, from Anita Stewart’s Canada.

“The first dish is called Plaltz, or pie by the yard,” he said. “The original recipe came from a fruit vendor at the Windsor Farmers Market. I was with mom when she was talking to this vendor. He scribbled down the recipe on a napkin. He made it in long trays. It’s like a giant danish, made with any available seasonal fruit.”

His other dish is salmon with a miso glaze. The delectable recipe was created by Michael and Nobuyo Stadtländer at Eigensinn Farm, Singhampton, Ontario.

As he cooked, Jeff reminisced about his mother, the cooking techniques and the local ingredients he used in both dishes. He said, “It is an honour to be the first chef to christen the food lab named after my mother”.