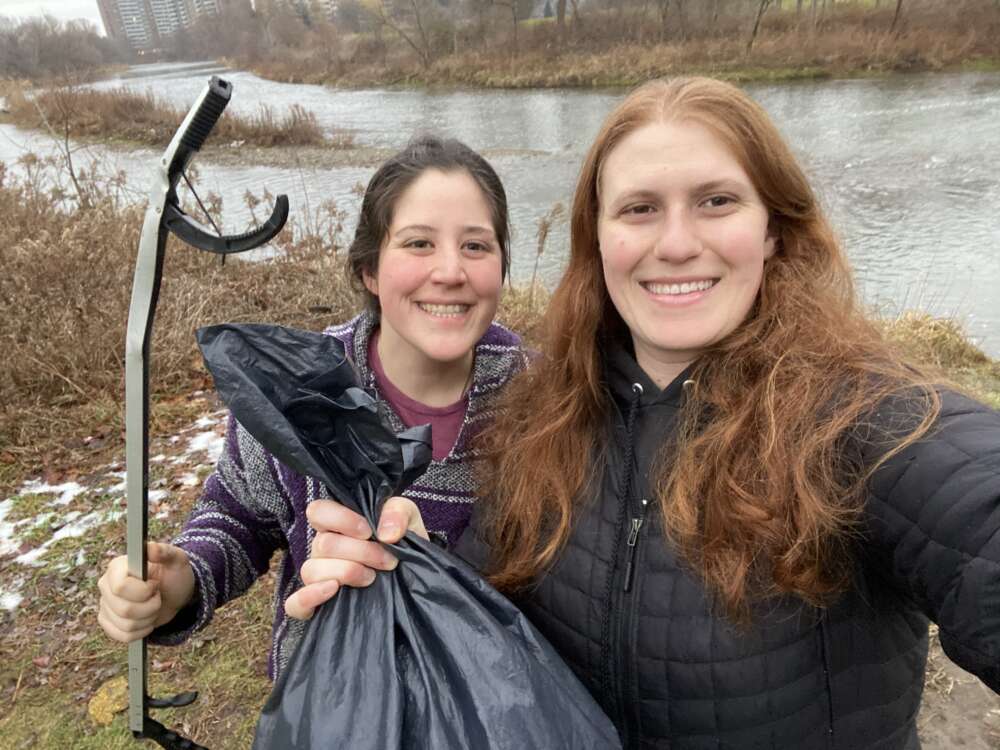 U of G grads Justine Ammendolia (left) and Jacquelyn Saturno have collected PPE litter for their study.

“I think people are unsure what to do with PPE litter, or they worry about exposure risk if they approach litter to dispose of it,” said Jacobs. “This is a unique item that’s been introduced into our daily lives and we just don’t know how to handle it.” 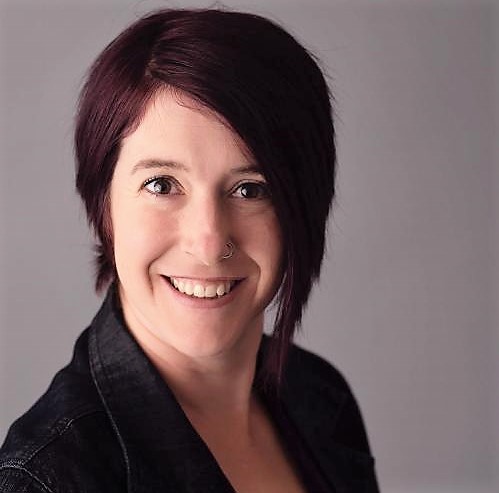 Jacobs conducted the study with Justine Ammendolia and Jacquelyn Saturno, both U of G graduates and now environmental scientists based in Toronto.

Their study was recently published in the journal Environmental Pollution. The Toronto Star and the Waterloo Region Record covered the research.

The project began after Ammendolia and Saturno noticed lots of PPE refuse around their west Toronto neighbourhood this past spring. Their five-week study includes recommendations intended to curb litter of protective items such as disposable face masks, gloves and disinfectant wipes.

Through late May and throughout June, the study turned up about 1,300 pieces of discarded PPE over an area equivalent to about 50 football fields. Ammendolia, a U of G zoology grad, called that amount “extremely alarming.”

During daily walks – done in the evening when they expected to encounter fewer people for physical distancing purposes – the couple focused on two residential neighbourhoods, two grocery store parking lots, a hospital district and a walking trail.

“We’re getting exercise, we’re picking up garbage and we’re also doing science. This is a triple win,” said Saturno, who studied environmental sciences at U of G. 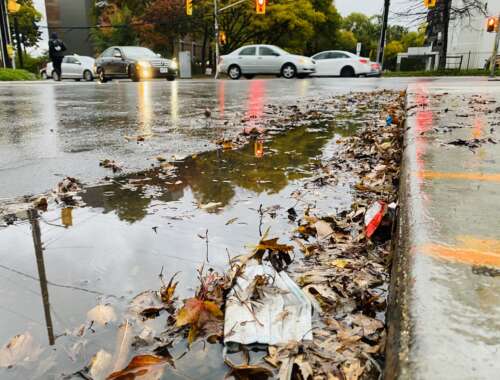 PPE mask litter has collected during the pandemic.

They recorded their finds on a Marine Debris Tracker app adapted to mark locations, dates and times, and types of refuse. The tool was co-developed at the University of Georgia New Materials Institute, whose members include two co-authors on the new paper: Dr. Jenna Jambeck, an expert on plastic waste management and a U of Georgia professor; and PhD candidate Amy Brooks at University of Georgia.

Ammendolia and Saturno found the most PPE refuse in grocery store parking lots, followed by areas around hospitals, and then residential streets and finally trails.

Out of the total 1,300 items, 44 per cent of debris consisted of disposable gloves. Face masks (mostly disposable) made up 31 per cent and disinfectant wipes, 25 per cent.

Jacobs said the gloves were a surprise, as they were not specifically recommended for general use early in the pandemic.

On average, they found up to 30 items each day. Amounts spiked in grocery store parking lots on weekends and just before holidays, including Canada Day.

Jacobs said they were shocked at the amounts of material. At the same rate, they said, discarded PPE in the study area alone would total more than 14,000 items a year. Jacobs speculated that less litter will appear in winter with fewer people outside and an increase in online grocery deliveries.

In their paper, the authors recommend that people reduce use of disposable gloves and use reusable face masks that can be cleaned and disinfected. They also call for more accessible PPE disposal methods and more public awareness through promotion and education.

Ammendolia and Saturno continue to monitor PPE litter in Toronto. The team has since expanded the project to involve “citizen scientists” in six countries, including several other Canadian cities.

“For two people walking daily to find 1,300 pieces of PPE is extremely alarming. Imagine it on a global level,” said Ammendolia, who is now considering looking at microplastics in water for a PhD beginning in 2021.

Before COVID-19, Jacobs was planning a study of microplastics at a long-time seabird field site in Alaska this year. Now, the U of G professor said, they might examine plastic accumulation in soils and insects or the larger-scale movement of waste from land into rivers, lakes and oceans.