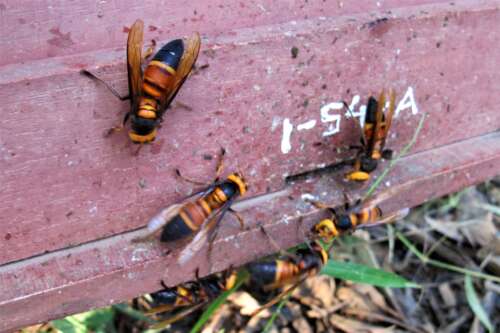 What’s the best way to ward off giant hornets if you’re a honeybee? Animal dung, according to a first-ever University of Guelph study.

U of G researchers have discovered honeybees in Vietnam collect and apply spots of animal dung around hive entrances to deter deadly nest raids by an Asian hornet (Vespa soror) whose North American cousins have been dubbed “murder hornets.”

This finding is also the first to document the use of tools by honeybees.

An invasive species in North America that came originally from Asia, giant hornets are almost as long as a golf tee and pack about seven times as much venom in a single sting as an ordinary honeybee.

Murder hornets (V. mandarinia) were discovered in 2019 in British Columbia and Washington. The arrival of the venomous insect to North America has raised concerns about human safety as well as threats to local honeybees and ecosystems.

U of G professor Gard Otis, who has studied honeybees in Vietnam for decades, said the hornets could ultimately carry out similar honeybee hive raids in North America.

“Giant hornets are the biggest wasps that threaten honeybees. They are one of their most significant predators,” said the environmental sciences professor. 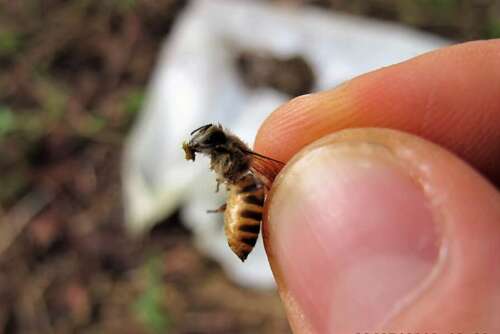 Otis conducted the study with lead author Heather Mattila, who completed her PhD at the University of Guelph in 2006 and is now a biology professor at Wellesley College in Massachusetts. Other co-authors were former U of G grad students Hanh Pham and Olivia Knight, as well as Ngoc Phan and Lien Nguyen in Vietnam.

Published recently in the journal PLOS ONE, the study was conducted in Vietnam, where U of G researchers studied V. soror.

These two species are the only hornets that recruit nestmates in organized attacks that can lead to nest breaches, said Otis. The hornets raid the nests, killing the bees and carrying away larvae and pupae to feed their own developing brood.

The researchers found that honeybees have developed a pre-emptive defence by collecting animal dung and applying it to hive entrances.

“This study demonstrates a fairly remarkable trait these bees have to defend themselves against a really awful predator,” said Mattila.

She said unlike their Asian counterparts, honeybees in Canada lack similar defences. That means North American beekeepers would have to rely on destroying the hornets’ nests, or hope that climate or other factors will limit the hornets’ spread.

Referring to Apis mellifera, the honeybee species commonly found in Canada, Mattila said, “They haven’t had the opportunity to evolve defences. It’s like going into a war cold.” 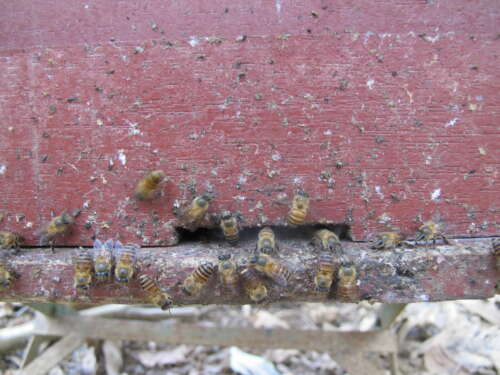 Otis began the project after asking beekeepers in Vietnam about dark spots at hive entrances of Asian honeybees. As part of a successful beekeeping development project funded by the Canadian government, he ran fall workshops from 2007 to 2011 in rural villages with high levels of poverty.

During one visit, an experienced beekeeper explained that the substance was buffalo dung. All the beekeepers that Otis worked with linked these hive spots with hornets. “Dung collection is a behaviour never previously reported for honeybees, and no one had studied the phenomenon,” he said.

The researchers gathered dung from water buffalo, chickens, pigs and cows, and placed it in mounds near an apiary. By the end of the day, some 150 bees had visited the piles, particularly collecting more odoriferous manure of pigs and chickens.

The team marked individual bees to identify them at their hives. Minutes later, they recorded videos of the marked bees applying the material at nest entrances.

The hornets spent less than half as much time at nest entrances with moderate to heavy dung spotting as they did at hives with few spots, and they spent only one-tenth as much time chewing at the hive entrances to get at the bees’ brood. They were also less likely to launch mass attacks on the more heavily spotted hives.

The researchers are unsure just what deters the hornets, although they suspect the insects are repelled by the smell of the dung. Dung may also mask odours emitted by the bees. 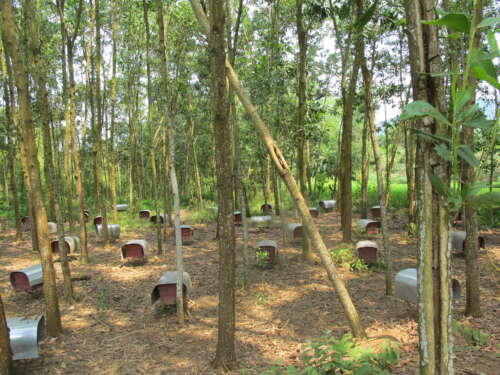 To further understand the hornets’ behaviours, the researchers extracted the chemical pheromone applied by hornets when marking their target hive. When the pheromone was applied to the bees’ entrance, it prompted honeybees to apply dung to the hive.

Many scientists disagree over whether certain animals – let alone insects – use tools.

To qualify as tool users, animals must meet several criteria, including using an object from the environment – in this case, dung. The bees clearly use the material to alter the hive with purpose, said Otis. And they shape and mould it with their mouth parts, which he said meets the test of holding or manipulating a tool.

Beekeepers in Vietnam normally control hornets by standing guard and swatting away individuals, preventing them from escalating their attacks.

“If you allow them, a group of hornets assembles, attacks the colony and takes over. The beekeepers control them every day by moving among their hives and whacking hornets.”

Otis said he was terrified at first about working near the giant hornets. The hazmat suits typically worn for protection by researchers in Japan were impracticable in Vietnamese heat, he added. Within a few days, the team learned the hornets were not defensive when they were in the apiary and away from their own nest.

“I got stung by one and it was the most excruciating sting in my life.”