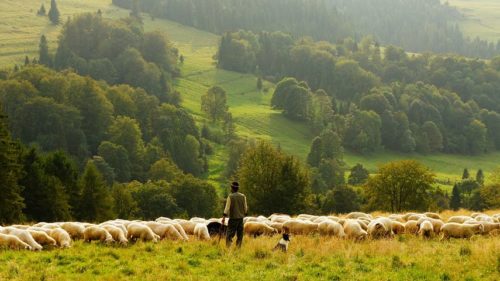 Agriculture has become a carbon-intensive endeavour. Crop, livestock and fossil fuel use in agriculture account for about 25 per cent of global greenhouse gas (GHG) emissions.

At the same time, more than 800 million people around the world are hungry and two billion are overweight or obese. About 30 per cent of food is lost or wasted, and yet we need 70 per cent more food to feed 10 billion people by 2050.

If we produce more food, in the same ways we have been, GHGs from agriculture will only rise. To introduce further complexity, the agriculture sector must reduce 20 to 30 per cent of its emissions to meet the Paris Agreement’s goal of keeping the average increase in global temperature 2°C below the pre-industrial levels.

Already, climate change disproportionately affects vulnerable people across the world. For example, the people living in the Karnali mountains of the Himalayas, have experienced famine for the past six decades. Although they don’t contribute much to global GHG emissions, they bear the unfair burden of extreme droughts and floods, later rain in lower altitudes and reduced snow in the mountains. Melting of Himalayan glaciers can disrupt over two billion people’s lives and livelihoods in Asia.

What we need is a “just transition” in agriculture to secure jobs, livelihoods and food for vulnerable people while eliminating emissions from agricultural industries.

World leaders have recently agreed to the principle of just transition when they adopted the Solidarity and Just Transition Silesia Declaration in Poland in December 2018. And this concept has made headlines across the world. One such example is the U.S. Democrats’ Green New Deal, which is a climate change spin to the New Deal of the post-Great Depression.

A just transition doesn’t come from taking either the business-as-usual approach or by shutting down industries without a plan. For example, when Ontario completed a phase out of all coal-fired power plants in 2014, those in Thunder Bay and Atikokan were retrofitted to run on wood to maintain the local economy and jobs. The just transition of these two plants also facilitated advanced biomass research and innovation.

Sustainable intensification relies on new mitigation technologies, the use of modern crop varieties, improved animal breeds, digital technologies and the efficient use of water, nutrients and chemicals. For instance, the Canadian government counts on “climate smart” and “precision” technologies to become the global leader of just agricultural transition. While enthusiasm for these new and emerging technologies is understood, caution is warranted to avoid repeating industrial agriculture’s problems.

Critics also argue that sustainable intensification focuses too much on food production and not enough on its equitable distribution and responsible consumption. For example, plants may be transformed into biofuel reducing the land available for food production and animals may suffer poor health in factory farms.

Agroecology includes a mix of social, economic and environmental goals. It has implications beyond technological innovation and sustainable production, beyond its environmental impacts.

Case studies confirm the optimism that the adoption of agroecological principles and practices would feed the growing population in socially, morally and environmentally responsible ways. For example, Yacouba Sawadogo, a farmer from Burkina Faso, who won the 2018 Right Livelihood Award, reversed desertification in the Sahel using ancient farming techniq

Closer to home, our research in rural Ontario looked at how high-speed internet transformed an off-the-grid family operated agroecological farm. Wind turbines, solar panels and wood meet all their energy needs to produce fruits and vegetables, run a bed and breakfast, publish books and host on-site workshops on lifestyle change.

One example of the overlap is the “System of Rice Intensification,” which increases yield with lower inputs and lesser environmental damage. Seedlings are planted further apart to allow for robust growth that reduces seed, fertilizer and agrochemical use, and controlled irrigation — instead of conventional flooding — increases water use efficiency and decreases methane emissions.

If neither sustainable intensification nor agroecological farming alone delivers a just transition, what’s the solution? While the former would continue at least some problems of industrial agriculture, the latter fall short of being adopted into the mainstream.

A more promising solution is to integrate the best approaches from conventional practices, sustainable intensification and agroecological farming, among others.

Agriculture is a unique sector for a just transition. It is both source of greenhouse gasses as well as a “sink” where crops and soils can capture carbon. We should exploit this feature as leverage in developing local and global strategies for a just agricultural transition.