When the Ontario Veterinary College’s Dr. Michelle Oblak used a 3-D printed custom titanium plate for surgery on a dog’s skull, the procedure not only marked a veterinary first in North America, but it also signalled a potential new breakthrough in cancer research.

In a difficult surgical procedure, Oblak and Cornell small-animal surgeon Dr. Galina Hayes removed a large cancerous tumour growing on a dachshund’s skull and replaced it with a 3-D printed custom implant that fit in place like a puzzle piece.

The story made national and international headlines. It ran in the New York Times, TIME, CNN, Boston Globe, NBC, on BBC, the Globe and Mail, CBC News, CTV News, and the National Post.

“The technology has grown so quickly, and to be able to offer this incredible, customized, state-of-the-art plate in one of our canine patients was really amazing,” said Oblak, assistant co-director of the U of G’s Institute for Comparative Cancer Investigation and board-certified veterinary surgical oncologist at OVC. 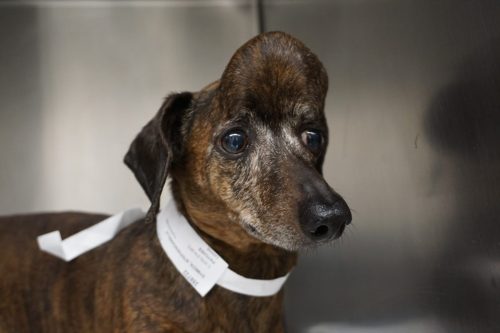 In her translational research, Oblak is examining dogs as a disease model for cancer in humans. She studies use of digital rapid prototyping for advance planning for surgeries and 3-D printed implants for reconstruction, using U of G’s rapid prototyping of patient-specific implants for dogs (RaPPID) working group.

Oblak performed the surgery on the dachshund, named Patches, at Cornell’s College of Veterinary Medicine with Hayes, a former OVC colleague. Hayes had asked Oblak for advice on how best to treat the dog’s tumour, a multilobular osteochondrosarcoma that had grown so large that it was weighing down the dog’s head and growing into her skull, pushing dangerously close to her brain and eye socket.

Working with the RaPPID team at OVC, Oblak mapped the tumour’s location and size. She worked with an engineer from Sheridan College’s Centre for Advanced Manufacturing Design and Technologies to create a 3-D model of the dog’s head and tumour so she could “virtually” perform the surgery and see what would be left behind once the growth was removed.

“I was able to do the surgery before I even walked into the operating room,” said Oblak, holding the small 3-D printed model of Patches’ skull with a detachable model of the tumour.

Once she could determine the dimensions of the portion of skull she’d need to replace, she worked with ADEISS, a 3-D medical printing company in London, Ont., to adapt software designed for human medicine. Together they created a skull plate to replace the part she planned to remove from Patches’ head.

Typically, she said, surgeries of this kind take a long time. Once the portion of skull is removed, surgeons must assess the damage and shape titanium mesh over the spot. The 3-D printed plate fit into place perfectly. For these surgeries, said Oblak, the technique will eliminate the need to model an implant in the operating room and reduce patient risk by shortening the time spent under anesthesia.

Oblak and Hayes had to replace about 70 per cent of the top surface of the dog’s skull, which left the brain unprotected over a large area.

“She was asleep for about five hours, and within about half an hour after surgery, Patches was alert and looking around. It was amazing,” said Oblak.

“This is major for tumour reconstruction in many places on the head, limb prosthesis, developmental deformities after fractures and other traumas,” said Oblak, adding that she sees tremendous potential for 3-D printed implant technology to be transferred to humans. “In human medicine, there is a lag in use of the available technology while regulations catch up. By performing these procedures in our animal patients, we can provide valuable information that can be used to show the value and safety of these implants for humans. These implants are the next big leap in personalized medicine that allows for every element of an individual’s medical care to be specifically tailored to their particular needs.”

Oblak and the U of G team can offer the surgery and customized skull plate through a veterinarian’s referral to the OVC Health Sciences Centre. Animals diagnosed with a skull tumour must be evaluated by a veterinary surgeon and have a CT scan performed to determine eligibility for this procedure. 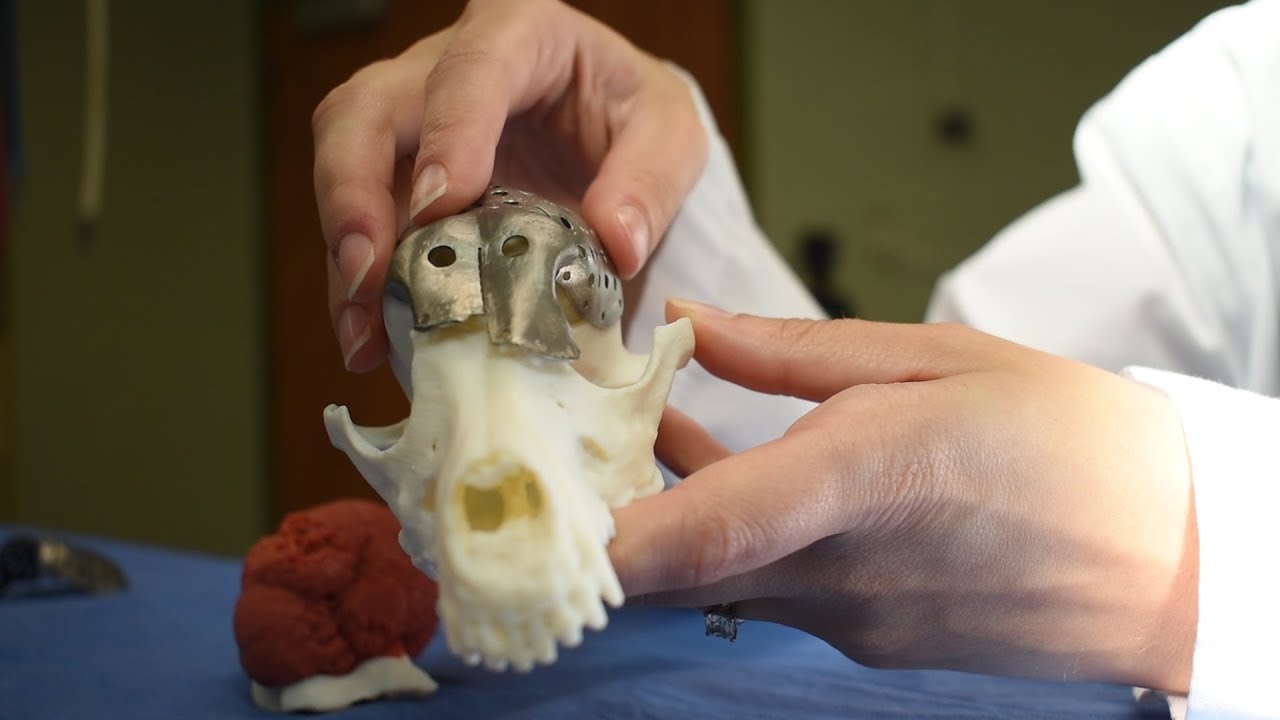