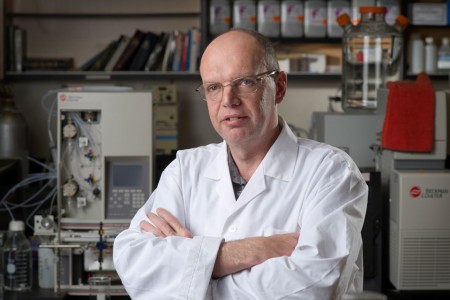 A University of Guelph professor who helped develop a new way to decontaminate produce is among the winners of the 11th annual Premier’s Awards for Agri-Food Innovation Excellence.

Prof. Keith Warriner, Department of Food Science, received a Leaders in Innovation Award along with Paul Moyer from Moyers Apple Products, based in Beamsville, Ont. The duo designed a forced-air ozone reactor, a chemical-free, waterless sanitizer for produce that reduces health risks and increases shelf life.

They developed the device for decontaminating fruit after a 2014 listeria outbreak linked to candy apples.

Warriner and Moyer also developed a process using ultraviolet light and hydrogen peroxide to decontaminate apples and other produce. 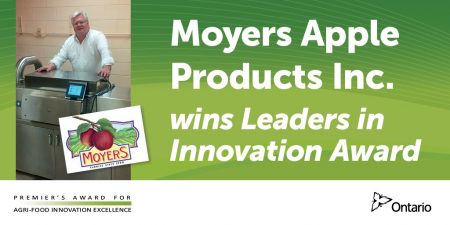 Their research was supported partly by the Ontario Ministry of Agriculture, Food and Rural Affairs.

Warriner is a well-known food safety expert who has published more than 100 papers, book chapters and abstracts. He studies food safety in the meat processing and fresh-cut sectors, and has developed decontamination methods for salmonella and for products that can cause food-borne illness outbreaks.

The awards were presented during the annual Premier’s Agri-Food Summit. Held in Toronto, the event brought together industry leaders to discuss growth of the province’s agri-food sector through trade and collaboration. U of G president Franco Vaccarino moderated an innovation panel discussion during the event.