The most common question young children ask when going to the doctor is, “Am I getting a needle?” says Prof. Meghan McMurtry, Department of Psychology. Fear of needles is common in children and may lead to reluctance to go to the doctor. That can be a big deal — with current recommendations, Canadian children typically will have more than two-dozen immunizations before they are 18 years old.

Despite how common needle fear is, there are few studies about how to best educate children in advance for common medical experiences such as needles and going to the doctor. Over the past few years, McMurtry’s research has focused on understanding needle fear, and exploring the effectiveness of various strategies to help children manage fear and pain when facing medical procedures, especially needles.

That fear is also common among adults, she adds, with 10 per cent reporting a high degree of apprehension about needles.

McMurtry’s Pediatric Pain, Health and Communication (PPHC) Lab recently completed a new study testing an approach to reduce fear in children by teaching these evidence-based strategies. Led by clinical psychology master’s student Jessica Dalley, and Ontario Veterinary College (OVC) students and faculty working at the OVC Smith Lane Animal Hospital in the Hill’s Pet Nutrition Primary Heathcare Centre, the study involved measuring children’s fear of and expected pain from needles before and after a tour of the animal hospital. 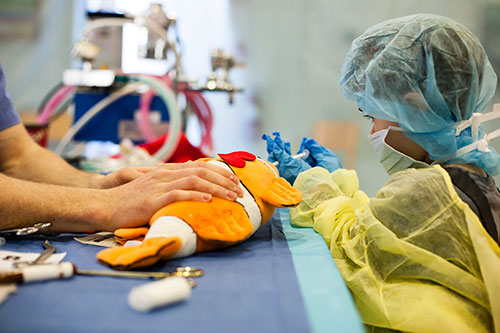 “The Smith Lane staff and students were already running ‘teddy bear clinics’, where groups of young children between five and 10 years of age visit the clinic, have a tour of the facilities, and bring their stuffed animals to be treated by the veterinary students,” says McMurtry. “When we became involved, we created a more structured activity, with pre- and post-testing of the children.”

To assess children’s expectations of fear and pain, Dalley used two validated scales (one for fear and one for pain) with drawings of faces. At one end of the Children’s Fear Scale, the face is calm and peaceful; at the other, the face is wide-eyed, frowning and clearly frightened and distressed. Those in between illustrate increasingly fearful expressions. McMurtry has used and validated this scale in her previous studies.

McMurtry, Dalley and other members of the PPHC Lab taught OVC students running the clinic how to interact with the children and teach the young visitors strategies such as “belly-breathing” and distraction to deal with painful procedures. The children had opportunities to practise these throughout the tours as their stuffed animals received needles and other “treatments.”

Dalley also provided the OVC students with a list of simple tips on working with children. “The list has ideas about how to engage children who are distracted and how to involve shy children in the activities, for example,” she says. “It also has suggestions about how to describe medical equipment and procedures in a child-friendly way.”

When the children were tested again at the end of the tour, their answers showed they expected significantly less pain from needles, and reported coping strategies they had been taught.

The collaboration with OVC was another positive aspect of the project, according to McMurtry, as both groups learned from each other. She notes that a recent study shows that veterinary students typically get more information on pain management for animals than medical students do about pain management for their human patients.

“Medical personnel do not always adequately manage pain, and this is why it is so important to empower children and teach them strategies to manage their own pain,” says Dalley.