University of Guelph student Grace Ly excelled in math and science in high school – subjects that every future engineer needs to master. But it was her involvement in dance, she said, that gave her the creative and collaborative skills she needed to become a leader in her university program. 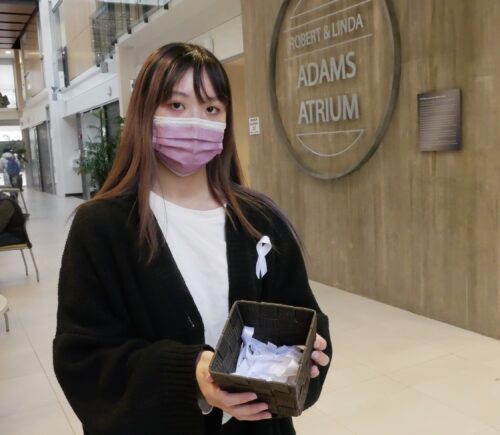 Engineering student Grace Ly with white ribbons that will be given out for the event.

Ly is a fourth-year engineering student at U of G and the president of the Guelph Engineering Society at U of G. She is part of the organizing committee for this year’s National Day of Remembrance and Action on Violence Against Women, the annual commemoration hosted by the School of Engineering.

“I liked math and sciences in school, especially biology,” said Ly. “But I went to an arts-focused high school and was a dance major. I really liked the creativity of dance and the collaboration involved in it. In engineering, you get to design a lot and work with others, and that’s why I chose the field.”

But Ly’s transition from high school to university took her from a world of dance dominated by women to the world of engineering, dominated by men.

“It was really interesting for me to be in that world of STEM (science, technology, engineering and math) where women weren’t in the majority,” she said. “For me, it has been important to make the transition from the arts to STEM, because there is a need for more women in the field. But I have found that the arts and engineering share a lot in common, in terms of creativity, design and working with others.”

Dr. John Donald, a professor in the School of Engineering (SOE), has worked closely with Ly on a number of initiatives. He said Ly has embraced the idea that engineering is a leadership profession. 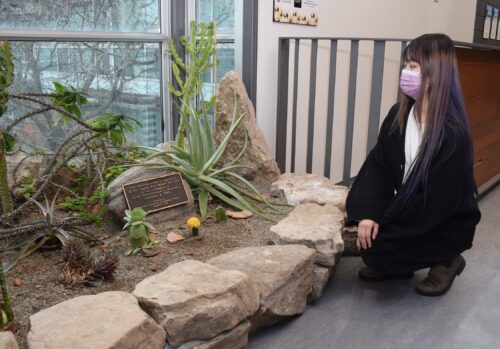 “Through her actions, she demonstrates that she understands that the value and impact of the work of an engineer goes beyond the technical,” Donald said. “Grace is an excellent problem solver, who is hard-working, conscientious and organized. And she is curious and open to learning new things. She will take action and get things done, and at the same time be humble and work as the ultimate team player. Most of all, Grace is caring.”

Ly was the volunteer coordinator of the 2020 Ontario Engineering Competition hosted by U of G and the lead organizer for the school’s annual Professional Development Conference. She is also the co-chair of next February’s CFES National Conference on Sustainability in Engineering at U of G.

“Grace is one of the students I have found to be a born leader,” said SOE professor Dr. Ashutosh Singh. “In my view, she works extremely hard to make sure that she achieves the results that are expected from her. Her nature is contagious. Students who work with her also tend to be more focused and demonstrate skills that will make them a great team member and leader. She has demonstrated that she cares a lot for her peers and works for their betterment. She is a real leader.”

Ly said she is proud of her role as president of the Guelph Engineering Society.

“I think that having the president of the society be a woman shows that we can lead and be in this position,” she said.

A woman was in her role during her first year at U of G, which she found empowering. “But it was always a white man in this role in the past. As an Asian woman, I feel very proud to be here.” 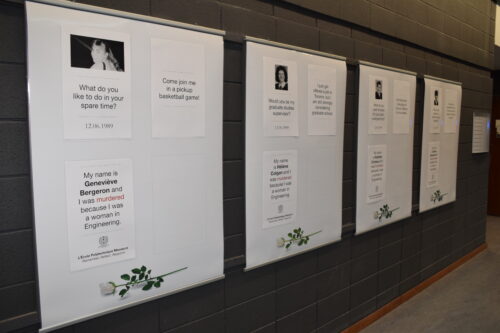 Posters of the victims of the Dec. 6 massacre maintained in U of G’s Thornborough Building

Each year, the School of Engineering hosts U of G’s National Day of Remembrance and Action on Violence Against Women. The event commemorates the 14 young women – including 12 engineering students – who were murdered in an act of violent misogyny by a gunman at the Polytechnique Montréal on Dec. 6, 1989.

Ly was born several years after the tragedy, but it has left a mark on her.

“In first year, I didn’t really know what this event was about, but in second year, as I became more involved, I started to understand,” she said. “Now that I’m older and the same age as the women who were murdered, it definitely hits a lot harder. It is hard to believe that there was a time when this was how society was.”

She said helping to organize the event enables her to empower others to remember the 14 victims and commit to combatting violence against women.

“Many years ago, it wouldn’t have been imaginable for an Asian woman to be in this role,” she said. “There have been shifts in society that make it possible for me to be able to do this, and it’s really important for me to take this opportunity.”