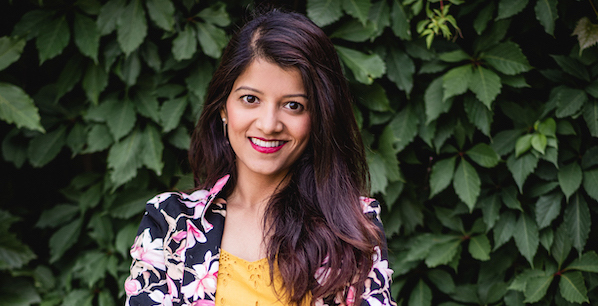 Deepa Rajagopalan, an MFA candidate in creative writing, won the award for her short story, Peacocks of Instagram. Her submission was selected from more than 130 entries by a jury of PEN Canada members.

In a PEN Canada news release, the jurors called Rajagopalan’s story “painfully vivid” with “a rich nest of subcultures, traumatic past experience returned to haunt the present, and a protagonist both comical and tragic.”

“I’m honoured to have won this prestigious award and to have my work celebrated by an organization that has done so much for writers and members of the media,” said Rajagopalan, who began writing the story during a fiction class earlier this year taught by author Michael Winter.

She also received advice and encouragement from her summer program mentor and Toronto writer Souvankham Thammavongsa, who won the 2020 Scotiabank Giller Prize for her own short story collection.

Commenting on the challenge of writing short fiction, she said, “The thing I like is that you can hold a short story in your head while you’re writing. The flip side is that you have to tell so much yet be so economical with words.”

Rajagopalan is an editor of Held magazine, a visual arts and literary journal produced by U of G MFA students. A graduate of the creative writing program at the University of Toronto, she is co-host and curator of the Emerging Writers Reading Series in Toronto. She is working on her first book, a collection of short fiction.

She was born in Saudi Arabia and lived in India and the United States before moving to Canada.

In a Q&A this fall with PEN Canada, Rajagopalan said, “When I write, I am drawn to characters who have a fluid sense of home. Many of them don’t have the luxury to think of things like belonging and are just trying to get by, either financially or emotionally. A lot of writing is about keen observation, and I think it comes with the territory of being the outsider.”