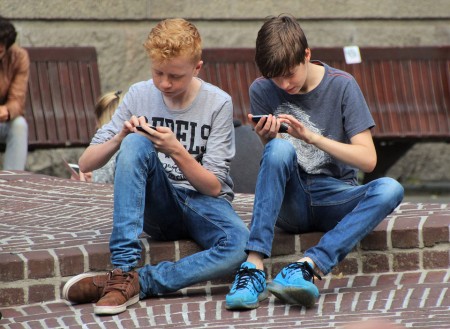 With cyberbullying, bullies can reach their victims even in the privacy of their own homes.

Can being a bully actually make you more popular? Perhaps, especially if you’re in elementary school, says Prof. Paul Sherman, program head of Family and Community Social Services at the University of Guelph-Humber. He says recent research shows that kids in Grades 6 to 8 often think that bullies are “cool.” Bullying behaviour tends to boost the social status of the kids who do it.

“Bullies are often seen as strong individuals, and if you are at an age or mindset when that sort of thing impresses you, then you would tend to view the bully in a positive light,” says Sherman. That’s a big motivation for kids to be mean or take advantage of others.

Ontario’s Bullying Awareness and Prevention Week (Nov. 20 to 26) encourages students, school staff and parents to learn more about bullying and its effect on student well-being.

For the victims of bullying, the harm is significant. Bullying can result in social anxiety, depression, loneliness, low self-esteem and even suicide. According to Statistics Canada, at least one in three adolescent students in Canada have reported being bullied, and 25 per cent of children in Grades 4 to 6 have reported the same.

With today’s technologies, bullies have a wider reach. “When I was growing up, bullying was largely face-to-face — physical and verbal,” says Sherman. “Now with cyberbullying the bullies can reach their victims even in the privacy of their own homes.”

Ryan Broll, a sociology professor at the University of Guelph, says the rise of cyberbullying has made defining bullying more challenging. Traditionally, he says, bullying requires three elements: intentionally causing harm to another; repeating that harmful behaviour; and a power imbalance between the bully and victim.

“With cyberbullying, the person may only tweet or post the attacking comment once, yet others can share it over and over,” says Broll, who is currently researching elements that may contribute to the risk of cyberbullying within a community, such as poverty, family relationships and school environments.

Broll and Sherman both see prevention as the most effective route to a solution. “Bullying is, at its heart, a relationship problem,” says Broll. “We need to teach children as young as possible how to solve problems, apologize to friends and deal with stress, and how to apply those skills online as well.”

Sherman says victims are often bullied because they are different from what’s considered “normal” in some way. His research focuses on teaching children about global citizenship, and he sees this as a way to educate students against bullying.

The professors say if prevention fails, there must be clear consequences for bullying. Broll’s previous research points to a coordinated effort between parents, teachers — and the police when necessary — as the best response.

Sherman says the most meaningful and long-lasting approach to bullying is to teach children about having compassion for others, and to respect diversity and difference.

“It’s important for children — and adults for that matter — to learn that their own happiness should not be based on other people’s suffering,” he says. “If we teach children that we are all connected, if we teach them to have empathy for others and to embrace diversity, then it’s harder for them to target or pick on someone.”

What parents can do: