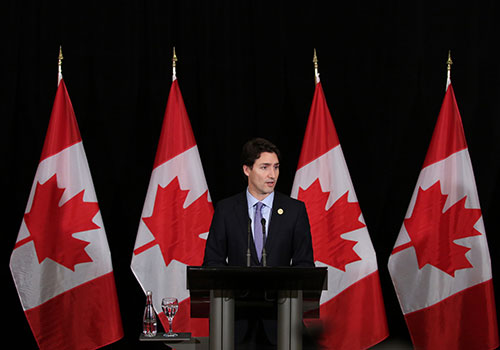 Prof. Matthew Hayday studies the history of Canadian politics at U of G. He’s intrigued by the ways Justin Trudeau’s campaign in the 2015 federal election echoed his father’s (former prime minister Pierre Trudeau) in 1968 and how it differed.

Hayday points out that despite repeating some of his father’s strategies, Justin has also been careful to look beyond his father’s legacy and connect to a deeper Liberal heritage.

In his Canadian political history course, Hayday shows his students news videos that illustrate the “Trudeaumania” of the 1968 election: the elder Trudeau was mobbed by crowds of mostly young women who took photos and asked for autographs. Justin Trudeau had the same power to draw major crowds at campaign stops, where people were eager to take selfies with him.

This was in sharp contrast to Stephen Harper’s approach, which became increasingly restrictive over the years regarding people attending his events or asking him questions. “This change in style is as important to many voters as the policy changes Trudeau promised — although ultimately he will have to deliver on his policy promises to retain voter support,” says Hayday.

Another reminder of his father: when asked if he really thought he could win the election, Justin repeated his father’s famous “just watch me” phrase.

Then on Nov. 29, less than a month after being sworn in, Justin had the official desk used by Stephen Harper put into storage and replaced it with the desk his father had used. But as Hayday points out, it would be incorrect to think of this as just “Trudeau’s desk.”

“Yes, Pierre Trudeau did use this desk, but it was originally Wilfrid Laurier’s desk, and it was used by Pearson and Chretien as well,” says Hayday. “I think that Justin recognizes that his father’s legacy is mixed — he was definitely not universally loved — and he is deliberately tapping into the longer Liberal history. He doesn’t want to be just the dauphin, just his father’s son.”

Another example: Justin Trudeau’s “sunny ways” quote from his speech when the election results were announced, which was originally used by Wilfrid Laurier.

Hayday says the changes Trudeau has enacted in his first month have mostly been symbolic, and that new laws and bigger reforms will take time.

“He is returning us to a Canada based on the Charter of Rights and Freedoms, and away from the scare tactics used by the Conservatives,” says Hayday. “But changes like the restoration of the mandatory census, the re-opening of veterans’ services, the unmuzzling of government researchers, and ordering an inquiry into the missing and murdered Indigenous women are already projecting a new Canadian identity.”

Photo from Prime Minister of Canada on Flickr (CC BY-NC-ND 2.0).