It’s been a long wait, but she’s ready to try again. After bad weather repeatedly forced cancellation of last summer’s planned swim across Lake Erie, University of Guelph student Coralee Allaert aims to attempt a 19.2-kilometre crossing of the lake in June to raise funds for youth mental health awareness.

And that’s just the beginning.

Less than two months later, she plans to more than double the challenge by tackling Lake Ontario – a 51-kilometre crossing that could take the better part of 24 hours depending on winds, waves and currents.

She hopes her dual Great Lakes swims will raise awareness and at least $30,000 for Jack.org, a Toronto-based national charity for youth mental health awareness, peer-to-peer education and resources.

“I’m ready to swim across these Great Lakes, putting one stroke in front of the other,” said Allaert, whose training regimen has seen her log up to 25 hours a week in the water in preparation. “It’s been a long wait with all the weather-related cancellations last year.”

Allaert to attempt lake crossings in June and August 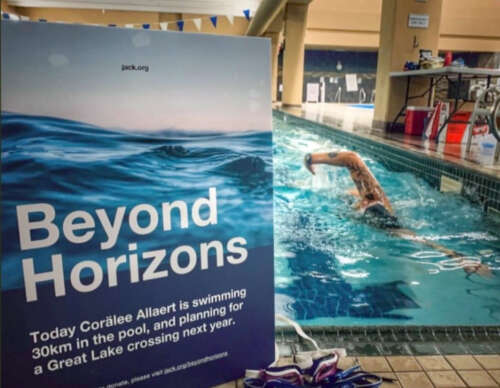 Last October, after her planned crossing of Lake Erie was thwarted, she swam the equivalent of a crossing by logging 30 km in an indoor pool. That feat netted more than $6,500 for Jack.org.

Between June 17 and 19, Allaert aims to cross Lake Erie from Sturgeon Point in New York State to Crystal Beach, Ont. She’s slated to attempt the Lake Ontario crossing from Niagara-on-the-Lake to Toronto between Aug. 3 and 8. For both endurance swims, she will be accompanied by a boat team; the events are supported by Solo Swims of Ontario.

“My training has been very demanding,” said Allaert.

Normally, she puts in about 30-35 km in the water each week, with periodic intensive weeks of up to 60 km. She trains in indoor pools, including the U of G pool, as well as in Lake Ontario and a quarry in Caledon, Ont. She also hikes and walks and hits the gym for strength and conditioning training.

A varsity swimmer at high school and university in New Brunswick, she swam part of the 18-km Northumberland Strait between New Brunswick and Prince Edward Island during a relay crossing at age 15.

Allaert also practises mindfulness training – a key aspect, she says, for spending hours at a time on the water.

“It’s about being able to realize that your journey isn’t always outward, it’s also inward. You’re trapped and isolated in your head for the duration of the swim.” 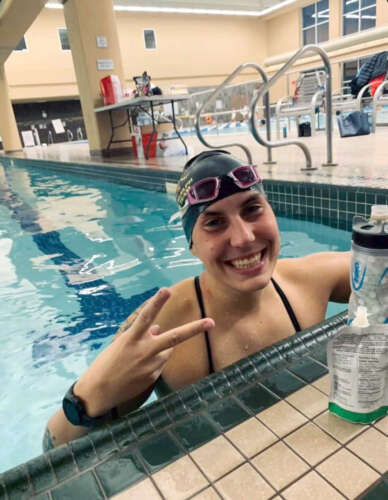 Besides taking in her surroundings and paying attention to her body, Allaert said, she uses her time in the water to think about the purposes of her training.

Partly, she’s aiming to raise funds and awareness for youth mental health. In a U of G news release last year, Eric Windeler, founder and executive director of Jack.org, said “mental health is the biggest health-related challenge for young people, and suicide is the leading health-related cause of death among young Canadians. This has to change.”

He and his wife, Sandra Hannington, founded the organization after their son, Jack, died by suicide in 2010 during his first year at Queen’s University. More than 200 chapters now exist across Canada, including a U of G chapter. The organization trains speakers, runs annual youth conferences, and provides resources for youth and their supporters.

She has struggled with her mental health since her teens; she began working toward her Lake Erie crossing last year while recovering from a serious bout of depression.

This fall, she will begin her fifth and final year of an arts and sciences program at U of G. She’s contemplating doing a master’s degree and hopes to pursue law studies or become a police officer.