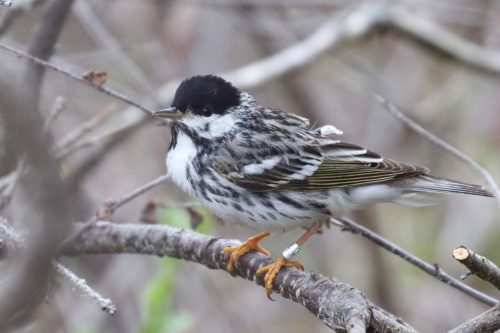 It’s an epic journey for a tiny bird.

For the first time, University of Guelph biologists have tracked an annual migration of up to 20,000 kilometres made by the 12-gram blackpoll warbler, one of the fastest declining songbirds in North America.

The bird’s trek between its breeding grounds in the central and western boreal forest of North America and its winter home in the Amazon Basin – one of the longest songbird migrations recorded — is the topic of a new paper by a research team headed by U of G biologist Ryan Norris.

The paper was published today in the journal Ecology. The research was covered in a Canadian Press article that appeared in the Toronto Star and elsewhere.

Describing a “great circle route” arcing across North America and including a transoceanic flight to South America, the study confirms an epic migration journey that scientists had long suspected but not yet proved.

In 2015, Norris and other biologists were the first to show that blackpolls breeding in the Maritimes and New England complete a non-stop transoceanic flight of up to three days and about 2,700 km along the eastern coast of the United States.

For this new study, they looked at the full migration of birds from central and western breeding populations.

“It’s amazing,” said Norris, who worked on the study with Hilary Cooke, associate conservation scientist with Wildlife Conservation Society Canada. “A bird weighing a couple of loonies travels from the western edge of North America all the way to the Amazon basin – and, in between, traverses the Atlantic Ocean.”

Other co-authors were integrative biology professor Amy Newman and U of G grad students Bradley Woodworth, Nikole Freeman and Alex Sutton, as well as researchers from other universities, conservation groups and national parks in Canada, the U.S. and Australia. 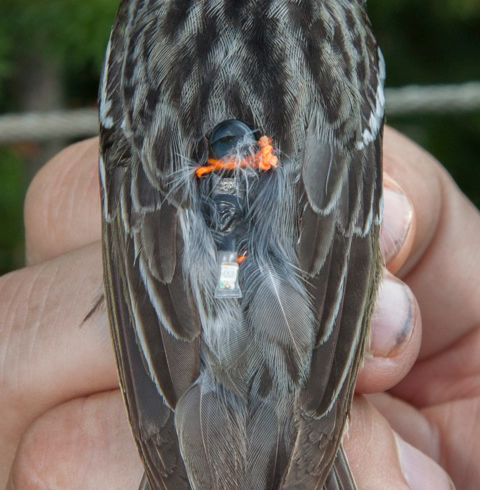 The tiny “backpack” is barely visible through the feathers of the blackpoll warbler (photo credit: Vermont Eco Studies)

For the study, researchers tracked birds outfitted with tiny geolocators from four boreal forest sites across northern Canada and Alaska.

Total southward migration took about 60 days on average over distances ranging from 6,900 km for birds breeding in Churchill, Manitoba, to 10,700 km for populations on the western edge of the continent in Nome, Alaska.

Blackpolls from Nome took 18 days to fly across North America to the Atlantic coast of the Carolinas. There, the birds spent almost a month fattening up to double their body weight before a non-stop, 2 ½-day flight across open water to overwintering grounds in northern Colombia, Venezuela and Brazil.

Norris said scientists had long believed that blackpolls followed the great circle route. Few of the birds have ever been found in the central or western States during fall migration.

He said population numbers have fallen in recent years, perhaps caused by habitat loss and declines in insect prey related to climate change.

“To understand what’s causing the decline, we need to know their full annual cycle,” he said.

“As a conservation scientist, what strikes me most is that in a single year a blackpoll warbler has to navigate 20,000 kilometres across land and ocean, facing risks of cat predation, storms and collisions with buildings and vehicles, all while trying to find islands of habitat to rest and refuel in our human-dominated landscapes,”said Cooke. “In comparison, the boreal region of northern Canada provides safe and high-quality breeding habitat for this declining species. Protecting Canada’s boreal forest is critical to saving this amazing songbird.”

Norris is now working with biologists in Colombia looking at the overwintering portion of the warblers’ life cycle. He said learning whether populations from across the boreal forest overwinter separately or together in South American rainforests may help improve habitat management along the migration route.